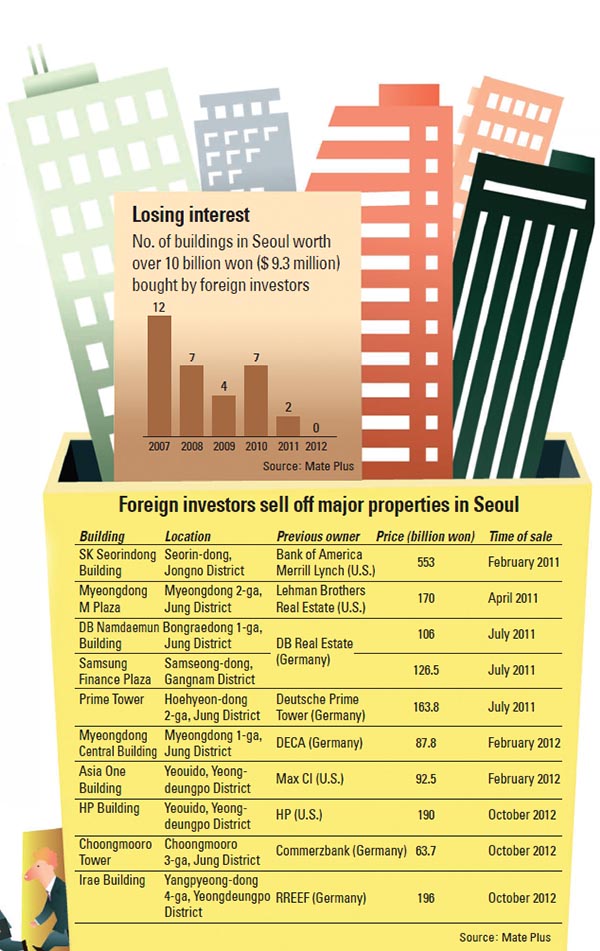 General Electric (GE) has packed up and left the domestic real state market 10 years after it made its first property investment here.

Last year it had properties up for sale worth a total of 400 billion won ($372.3 million), including the Trees Building in Gangnam, Top Building in Seongnam, Gyeonggi, and another building it owned in Daegu.

GE is not the only foreign investor that is cashing out on their property investment in Korea.

According to the industry, there are only about 20 or so foreign investors that still own major properties in the country. This is roughly 30 percent of the rate six or seven years ago.

“Foreign investors that have suffered losses in the past two to three years are leaving the country as they have come to the conclusion that there are few properties they can profit from,” said Kim Tae-ho, an official at R2Korea, a real estate investment consulting firm.

The U.S. investment firm Max CI sold its Asia One Building early last year in Yeouido, central Seoul, to Hyundai Card and Hyundai Capital for 92.5 billion won. Even today, foreign investors have only about 20 buildings up for sale in the domestic market. They didn’t buy any last year.

The biggest reason they are offloading now is the falling rate of profit.

According to the Ministry of Land, Transport and Maritime Affairs, the annual profit rate on office buildings has fallen to 5 or 6 percent from around 14 percent in 2008.

This is largely because of increased supply. The situation isn’t likely to improve any time soon as more office buildings are nearing completion. Recent high-profile openings include the posh Center 1 building in Euljiro, central Seoul, and the IFC mall in Yeouido. Additionally a new office district in Yongsan, Seoul, and a second Lotte World in Jamsil are currently under construction.

“The supply of new office buildings next year will likely increase 20 percent,” said a researcher at the Construction Economy Research Institute of Korea. “And most will be concentrated near the downtown area, including Mapo and Yeouido.”

In 2005, Lehman Brothers Real Estate Partners Korea bought Myeongdong M Plaza for 95.5 billion won, and sold the building six years later for 170 billion won. However, barely any of this 74.5 billion won net profit is believed to have actually helped the company’s bottom line as the cost of managing the property in the interim would have gobbled much of this up.

“[Foreign investors’] expectations of turning a profit from leasing and selling properties have fallen considerably,” said Byun Je-hyun of Mate Plus. “Furthermore, they no longer have good reason to invest in the property market here as the profit rates in the U.S. and European markets are higher, averaging around 8 percent.”

The global recession is another reason property investors are pulling out of Korea.

“In some cases, foreign companies are pulling out because the financial situations of their headquarters overseas aren’t favorable,” said Ahn Min-seok, an analyst at FR Investment, a commercial building consulting and investment firm.

The impact of them leaving will be mitigated by Korean companies and institutional investors snapping up the properties, pundits say.