Fertility rate hits highest level in over a decade

Fertility rate hits highest level in over a decade 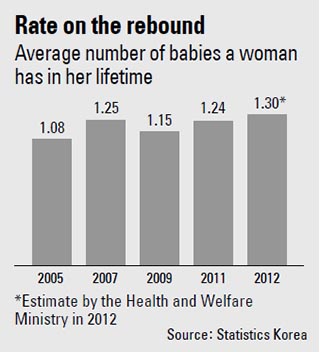 The country’s fertility rate was around 1.3 children per woman last year, marking the first time for the country to have reached that level in 11 years, the Ministry of Health and Welfare said Friday.

For demographers, the 1.3 mark is critical. A nation below that level is deemed in the “lowest-of-low fertility” category.

The ministry made public the report Friday, following a meeting held by the presidential commission on birth rate and aging society presided by outgoing president Lee Myung-bak at the Blue House.

“Whether Korea will become one of the world’s most aged societies or remain a dynamic society full of young people largely depends on how the government preemptively tackles the problem through policies [in the next five to 10 years],” the ministry said in its report released Friday.

The ministry warned that if the current rate of low fertility continues, Korea will become a super-aged society by 2026, in which people aged 65 and above account for 20 percent of the total population.

The ministry also predicted the country will be able to maintain its population around the 55-million mark in the 2060s if the fertility rate reaches 1.79 by 2045, powered by a steady recovery in the birthrate over the years.

The expected rebound in the fertility rate is attributed to a package of government policies aimed to boost Korea’s low birthrate in the 2000s.

“Since 2005, the government has especially focused on making it possible for married women to work and raise a child at the same time,” Lee Jae-yong, director of the ministry’s division of policy for aging society told the Korea JoongAng Daily.

Lee added that the recovery of the Korean economy, following the 2008 financial crisis, has led to an increased number of marriages in recent years, helping boost the fertility rate last year. However, Lee said, “Korea’s fertility rate is still far behind the OECD’s average fertility rate, which was 1.7 in 2010.”