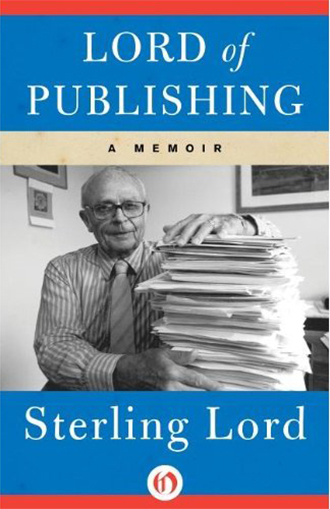 The legend of Sterling Lord dates to 1952, when he was just getting started as a literary agent. Into his basement-level office on Park Avenue walked a young man wearing “a light weather-resistant jacket and lightweight checkered shirt.

“He was striking looking ? ‘diamond in the rough’ was the phrase that came to mind,’’ Lord writes in his new memoir.

It was Jack Kerouac, and wrapped inside a newspaper was the manuscript for what became “On the Road.’’

Lord is 92 years old and still keeps regular hours at the bright, downtown offices of Sterling Lord Literistic Inc. His clients have ranged from Ken Kesey to the creators of the Berenstain Bears. He has lunched with Jackie Kennedy, played tennis with Katherine Graham and had the will to say no to Lyndon Johnson when the president was seeking help to get a book deal.

His memoir is called “Lord of Publishing’’ and his peers see nothing out of line about the title. His name means “respect,’’ “gentleman agent,’’ a “class act,’’ according to fellow agent Jane Dystel.

“This is a guy who has been around a very long time, through many iterations of our business, which is constantly changing, and has survived,’’ says Dystel, whose agency’s clients range from Starbucks CEO Howard Schulz to crime writer John Locke. “He does it with real determination and skill, in a very low-key style, but determined.’’

When Lord met Kerouac, the young Beat already had published a novel, “The Town and the City.’’ But he was having a harder time with his second book, starting with the way he had written it. “On the Road’’ was born on a 120-foot scroll that he was known to unfurl on a publisher’s floor. Not all dared to read it, but Lord did and found something fresh and dynamic, a jolt to the growing conformity of the times.

So he took on the book and suffered the rejections, including one from a Knopf editor who thought “On the Road’’ was neither “saleable’’ nor “well-made.’’ Kerouac was ready to give up, but not Lord. By the mid-1950s, he had sold excerpts to The Paris Review and New World Writing. Viking Press agreed to publish the novel, for an advance of $1,000. “On the Road’’ was released in 1957, The New York Times raved and Kerouac became a hero for a generation of adventurers.

Lord writes that Kerouac was essentially a shy man who didn’t know how to handle the attention. His drinking worsened, Kerouac died in 1969 at 47. Lord tried to help him, but realized that he was a literary agent and not a “life agent.’’ And he had rarely seen the author’s darker side, reasoning that he was a parental figure for whom Kerouac remained on his best behavior.

The business remains stimulating for Lord, an improbably fit-looking man whose agency handles books by Rachel Maddow, David Mitchell and many others. He sees a strong future for e-books and has been working with digital publisher Open Road Integrated Media to make sure older works by Jimmy Breslin, the late Howard Fast and others are available in electronic format. He also turned to Open Road for an even more challenging project: His own book.

Interviewed recently at his office, Lord credits his endurance to moderate living, good genes and decades of competitive tennis. Time has been held back, too, by one the great blessings of earthly existence: making good money doing something you love.

“A number of things about this business have really caught me and made it a compelling interest,’’ he says. “First, I’m interested in good writing. Second, I am interested in new and good ideas. And third, I’ve been able to meet some extraordinarily interesting people.’’

You could pitch his story in a simple sentence: Iowa boy makes good. After graduating from Grinnell College, where he was captain of the tennis team, he worked for Cosmopolitan and other magazines in the 1940s and early 1950s. He met several writers he thought talented enough to write books and many agents he thought without the knowledge to make the best deals. So he became an agent himself.

“I had never even seen a book-publishing contract,’’ he writes.

Many of Lord’s favorite stories are told with a sense of amazement that he was part of them. He enraged LBJ when he declined to help find a publisher for his memoir, believing that the president was mostly interested in money and doubting ? with good reason, it turned out ? the book’s potential. He became friendly with Jackie Kennedy during her years as a book editor at Doubleday and Viking in the 1970s and 1980s, sitting next to her at a dinner at the 21 club and serving her sandwiches for lunch in his office.

Lord also has lived to see “On the Road’’ finally come out last year as a movie, a process that began decades earlier when Kerouac had hoped to interest Marlon Brando. But Lord had little to do with the film, directed by Walter Salles, and has yet to see it. He had tickets for opening night, but knew the movie had received mixed reviews and was not interested in the after-screening party.

“Lord of Publishing: A Memoir”