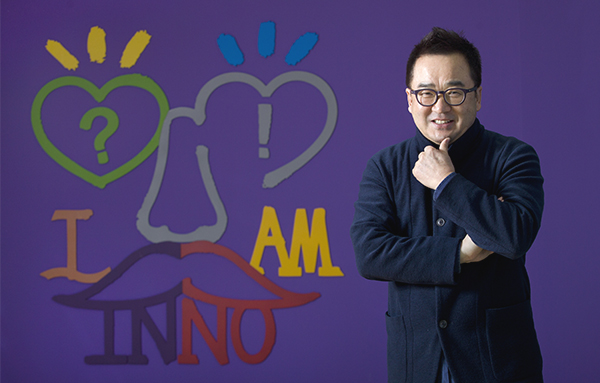 
Christmas is long gone, but industrial designer Kim Young-se has plenty of presents to go around. His craft, Kim says, is all about “loving others” by inventing products that make consumers’ lives more convenient and fulfilling.

At his office in Pangyo, Gyeonggi, an area quickly emerging as Korea’s next IT hub, the designer discussed his creations in an atmosphere that seemed very much to reflect his creative personality.

Purple-painted walls were decorated with slogans about spreading love while items like a ping-pong table and purple Christmas tree filled the rooms.

Among his best-known creations are a Dongyang Magic portable gas burner nicknamed “Lobster” for its uniquely rounded design, a necklace-style iRiver MP3 player and the Amore Pacific Laneige compact that slides open instead of popping up.

His latest “present” to those he loves is the underground 255-meter (738-foot) space that connects Ichon subway station (Line 4) to the National Museum of Korea in Yongsan District, central Seoul.

Of the three million people who visit the museum each year, over 60 percent - or 1.8 million - use the subway and will benefit from the new structure.

“Yes, you could say that it is the largest thing I’ve ever designed,” the 63-year-old said of the project dubbed “Moving Museum.” It opened to great fanfare last month.

Kim came to be interested in the unconventional profession of industrial design almost by chance. In the 1960s, he noticed a magazine about the field at a friend’s house back when most Koreans hadn’t even heard of it.

In the next decade, he moved to the United States to study, and later went on to launch Innodesign in Silicon Valley in mid-1980s. He was the first Korean to open a design consulting firm there.

Building on his success, he returned to his motherland in 1999 and opened Innodesign Korea, which works with high-profile clients like Samsung Electronics and LG Electronics.

Asked about what product category he would like to venture into next, Kim said it could be anything.

“I can make anything that I imagine, and I can give a present to anybody I want,” he explained. In Kim’s mind, it seemed, that there was nothing that design couldn’t make better.

Q. Let’s first talk about your latest work, “Moving Museum.” How was it working on the project?

A. It was a new, different kind of experience to be involved in such a major design project initiated by the Korean government. It was also kind of surprising [that I was given such a project by the government] at least in Korea.

Nonetheless, I was delighted and said to myself, “What a great opportunity to show my love for Korea.” It is also a project that impacts many Korean people, as well as foreign tourists, who visit the National Museum of Korea.

When Chinese director Zhang Yimou designed the opening and closing ceremonies of the 2008 Beijing Olympics, I was envious that he had the huge stadium to express his ideas.

But with the “Moving Museum,” one can say I got a one-kilometer canvas, with the floor, ceiling, walls and additional space included. Although Zhang’s work has already come to an end, the “Moving Museum” will probably last for many years to come. So it was quite an honor to do this project.

I am happy with the outcome as I think it portrays modern, contemporary Korea, but with the traditional, quintessential elements in a restrained manner.

What was your inspiration for “Moving Museum,” and where did you get it?

Immediately after I was asked to design the “Moving Museum,” I thought of the taegeuk [yin and yang] and the four black trigrams [that make up the Korean flag along with the taegeuk].

I have always been greatly impressed and inspired by these symbols. The curvy lines in the taegeuk display the emotions and warmth of Koreans, while the straight lines in the black trigrams represent the strength and perseverance of the Korean people.

They contradict each other, but together they become the best description of Koreans. In fact, I believe anybody that has both qualities is a good, upright person.

The National Museum of Korea is one and only in the country, and I was so amazed at its great collection. So what better icon than a taegeuk for the museum?

In fact, I have been designing products with the taegeuk as a motif since 2000, which we call T-line. They range from fashion accessories to stationery to lifestyle products. So this is not just a one-off motif.

“Moving Museum” is public design. Was it a lot different from the industrial design that you normally do?

Amazingly, the process is very much the same. I’ve designed something that is palm-sized and also an underground tunnel that’s 255 meters long, the “Moving Museum.”

But the design processes for both are not that different.

Design is about your mind - expressing your mind, thoughts and love - and the result has to be totally user-oriented.

I started my design process by first thinking about the symbols and icons that best represent Korea, and then thinking of ways to give the people that use the tunnel eight minutes of joy and delight. It takes eight minutes for people to walk through the underground tunnel of “Moving Museum.”

In fact, I made a sketch in just five minutes, and people at the National Museum of Korea and the Ministry of Culture, Sports and Tourism loved it.

I now hope that the 1.8 million people who use the tunnel also get some kind of feeling, immersed in the mood from the experience of walking through the underground tunnel of “Moving Museum.”

You are best-known for the iRiver necklace-type MP3 player and Laneige sliding compact. What are some works that are special to you?

The two items you mentioned are special to me in that they were hugely popular and they are the items that people still associate me with.

I got the idea for the iRiver necklace-type MP3 player when I was sipping coffee at a Starbucks in Apgujeong, southern Seoul.

Through the window, I saw this gorgeous, fashionable woman. She was so stylish and chic from head to toe, except the MP3 player she was holding. It was a “flaw in a jewel,” so to speak. That’s where the idea for the iRiver MP3 Player N10 came about.

As for the Laneige sliding compact, I had no idea about women’s make-up when the cosmetic company asked to do a project with me. But it was my wife that gave me the idea, saying that she needed a compact that she could use when only one of her hands was available - like when she’s driving or on the phone.

With my job, I can make anything that I imagine. And I can give a present to anybody I want. It’s my joy.

Is there anything you can’t design? What kind of product do you think you will be working on next?

No, I don’t think there is anything that I cannot design. As to answer your second question, even I don’t know.

I have designed everything from gadgets and consumer products to living goods, furniture and even a public space. Still, I am open to any kind of challenge.