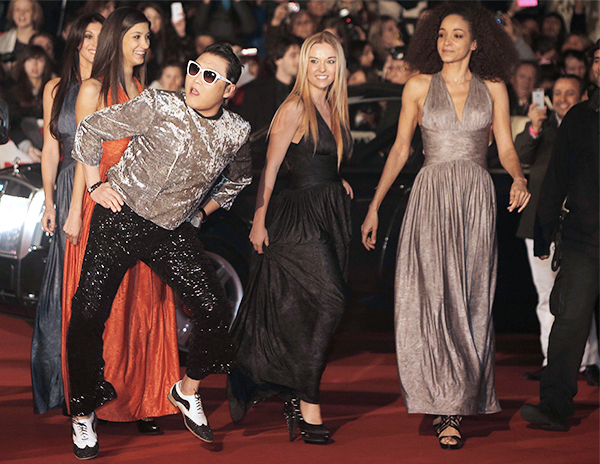 Psy arrives at the Cannes festival palace to take part in the NRJ Music awards ceremony on Saturday in Cannes, southeastern France. [AP/YONHAP]


CANNES, France - More participants from Asia have signed up for the annual Midem trade fair in Cannes this year, said director Bruno Crolot, adding that Korea has a pavilion for the first time in a number of years and Malaysia also is exhibiting.

YouTube sensation Psy, who shot to international fame with his “Gangnam Style” video that chalked up the highest-ever number of YouTube views, jetted into the seaside resort to attend the “NRJ Music Awards 2013” that took place on the eve of the Midem show.

“I believe we can now say that the music industry globally is on the road to recovery and heading for growth for the first time since 1999,” said Frances Moore, chief executive officer of the International Federation of the Phonographic Industry,

“We may not get there this year, but the direction of travel is clear,” Moore added, noting that every digital revenue stream, including music downloads, subscriptions, ad-revenues and other channels, is growing.

The main driver helping fuel this turnaround in the music sector is the increasing popularity of music download and subscription services, such as Deezer, MOG and Spotify, say industry executives.

This advance is also worldwide, Edgar stressed, noting that eight of the top 20 music markets are showing growth.

“I’m extremely confident about future development of the recorded music industry going into 2013,” he said.

How much this upturn in the digital music sector can cover the losses and decrease in physical formats such as CDs and records, however, is still uncertain, according to experts.

Crolot said digital music is growing in such a way that it’s now starting, at least in some places, such as the United States, to cover the losses and decline in physical sales.

These and other topics are being discussed at the show’s packed conference programs that take place in parallel with the real business of buying and selling music.

Some of the subjects that are being discussed include using YouTube as a source of income for artists.

Last week, Google touted the YouTube video “Gangnam Style” as an advertising success that has reaped more than $8 million in ad revenue.

Google Chief Business Officer Nikesh Arora cited the figure, which he credited to outside sources, while discussing the money-making potential of YouTube during a quarterly earnings call with financial analysts.