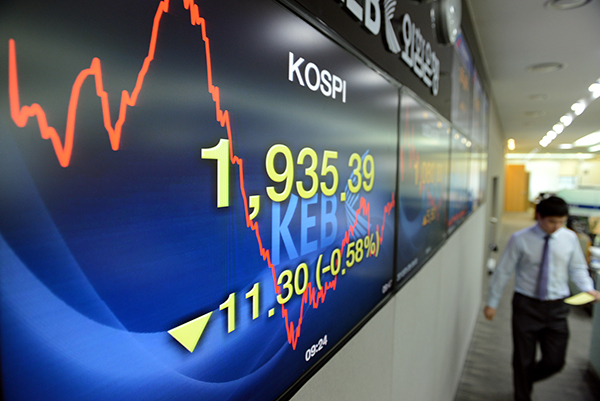 The Kospi closed at 1,939.71, down 0.36 percent from Friday as foreigners dumped Korean shares which weakened the won. [YONHAP]

The local currency closed at 1,093.50 won against the greenback, 19 won higher than Friday’s close on news from the European Central Bank that 278 financial institutions in Europe will return 137.2 billion euros ($184 billion) on Wednesday as an early repayment, higher than what economists forecast.

This was the steepest single-day depreciation of the won since Sept. 27, 2011 when its value plunged 22.7 won against the dollar.

European Central Bank chief Mario Draghi said at the World Economic Forum in Davos, Switzerland, on Friday that financial markets in the region are experiencing “relative tranquility” at the start of 2013.

“The level of economic activity is in the process of stabilizing at very low levels and we foresee a recovery in the second part of the year,” Draghi said.

Market observer said foreign investors dumping Korean shares also greatly attributed to the won’s weakening. Foreign investors sold off over 500 billion won worth of stocks yesterday as they doubted the Kospi’s further rise. Also contributing was Vanguard Group’s decision to sell its holdings of Korean stocks in a 25-week process from Jan. 10.

The U.S.-based asset management company aims to change the benchmark used to measure the performance of its emerging-markets stock index funds to the FTSE from the MSCI this year. FTSE classifies Korea as a developed market.

Signs that the government may intervene in the foreign exchange market also helped the won’s fall.

Due to growing concerns about the strong won, Finance Minister Bahk Jae-wan said last week the government is ready to contain the won’s appreciation.

“We can say the minister’s remarks had some impact on the market,” said Yoon Tae-sik, managing director of the International Finance Bureau at the ministry. “Yet, external factors like the North’s threats and foreign investors’ selling had a larger effect.”

Bahk said that on top of the three traditional measures to control the foreign exchange market - lowering the ceilings on foreign exchange positions at banks, charging taxes on foreign investments in Treasury bonds and adding a levy on banks’ offshore debt - there are some new measures.

One of them is the idea of Tobin tax, an idea raised by Nobel economics laureate James Tobin in 1972, is to levy taxes of 0.1 to 0.5 percent on all kinds of foreign-exchange transactions.

The government is discussing a form of the Tobin tax, according to insiders at the ministry.

Choi Jong-ku, deputy minister for international economic affairs at the Finance Ministry, is scheduled to describe the government’s plan at a seminar that will be held by the Korea Institute of Finance tomorrow.