Pantech first in Korea with full-HD

Pantech first in Korea with full-HD 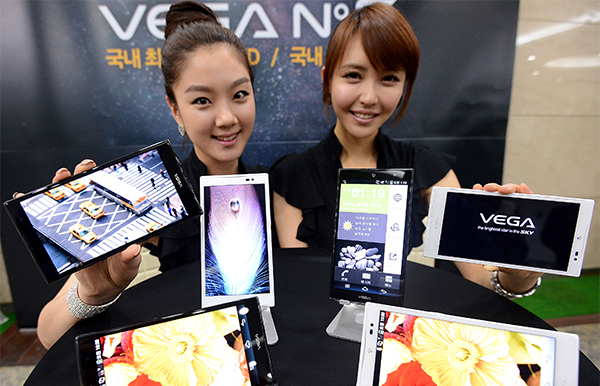 Models showcase Vega No. 6 HD smartphones from Pantech yesterday at the Pantech R&D Center, western Seoul. Provided by the company

Pantech, the nation’s smallest mobile phone manufacturer, yesterday unveiled a smartphone that has a 5.9-inch full-HD display that boasts 2.25 times higher resolution than ordinary smartphones. It is the first of its kind in Korea.

The Vega No. 6, the successor to the Vega R3 that was released last September, runs the latest Android Jelly Bean 4.1 operating system and features a 13 megapixel camera and a natural IPS Pro Full HD liquid-crystal display from Sharp, the biggest full-HD display of any domestically released smartphone.

It also features Qualcomm’s quad-core Snapdragon S4 Pro processor. The American chipmaker is the biggest shareholder of Pantech with an 11.46 percent stake.

“We have set the retail price at a range that minimizes consumers’ burden,” said Kim Joo-sung, head of domestic marketing.

It will be sold by all three mobile carriers, but the company did not specify a release date. Nor has it established overseas release plans.

As the speed of data transmission for video, audio and images has skyrocketed with the rapid penetration of fourth-generation long-term evolution connectivity, consumer demand has increased.

To ease single-handed manipulation of the large screen, Pantech has added a touch pad on the back of the device. Users can scroll using an index finger without having to use their other hand thanks to the function that Pantech calls “V touch.”

The Vega No. 6 launch is expected to ignite a full-HD display war among Korean smartphone manufacturers.

“Last year, long-term evolution (LTE) and quad-core were the keywords for competition. We thought the next trend would full-HD displays,” said vice president Lee Jun-woo at a press conference held at the Pantech R&D Center in Sangam-dong, western Seoul. “We sold 800,000-900,000 units of the Vega R3. For the Vega No. 6, we plan to sell more than that.” He said the company expects the new device to help Pantech push into the black in the first quarter.

Although Pantech may have briefly garnered fame as the “first domestic producer” to come up with a full-HD screen smartphone, the situation for the company, which graduated from a four-year debt workout program in late 2011, could soon sour when industry giants Samsung Electronics and LG Electronics follow suit in less than two months.

Earlier this month, LG announced plans to launch the Optimus G Pro, a follow-up to its flagship Optimus G phone.

The smartphone will have a 5.5-inch full-HD display that could be launched in Korea as early as next month.

Samsung plans to top its super-slim full-HD in-house Amoled panel with its much-anticipated Galaxy S4 flagship smartphone, widely expected to debut globally Feb. 25-28 at the Mobile World Congress 2013. The panel will be thinner (1.6 millimeters or 0.06 inches) than the Galaxy S3 (1.98 millimeters).

Overseas, the first smartphone to come with a full-HD display was released in Japan last October by China’s HTC. The J Butterfly phablet features a 5-inch screen.

Sony Mobile, Huawei and ZTE also are expected to launch new full-HD Android-powered smartphones during the first half of the year, according to multiple sources.