DUP goes after Kim Yong-joon with both barrels

DUP goes after Kim Yong-joon with both barrels 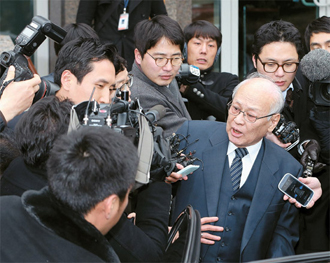 Opposition lawmakers yesterday vowed to put prime ministerial nominee Kim Yong-joon under a microscope following scandalous accusations involving his family’s wealth and questions over his past rulings as a judge.

Ever since President-elect Park Geun-hye nominated Kim, 74-year-old former chief justice of the Constitutional Court who currently heads the presidential transition team, to become her first prime minister, a series of accusations has been made about his two sons’ draft dodging and inheritance tax fiddling.

The largest opposition Democratic United Party, which initially showed a reserved response to the nomination, yesterday said its position has changed to aggressive grilling.

“The mood has changed from ‘too much is as bad as too little’ to ‘no retreat at the battlefield’ since the weekend,” said Park Yong-jin, spokesman for the DUP.

“We saw some achievements by aggressively grilling the Constitutional Court chief justice nominee Lee Dong-heub,” he said. “But we were also worried that the people could think we were trying to kill all major nominations. But now the situation has changed that we not only need to vet Kim’s abilities as a responsible prime minister but also his integrity. As an opposition party, we have no choice but to prepare a thorough vetting.”

The DUP yesterday selected five lawmakers, including Representative Min Byung-doo who will grill Kim at the confirmation hearing. The National Assembly’s special committee on the hearing will have 13 members, including seven ruling Saenuri Party lawmakers. The remaining six, including five from the DUP, will represent the opposition on the committee.

The National Assembly is scheduled to hold a confirmation hearing early next month. The legislature’s approval is a prerequisite for Park to formally appoint him as the prime minister.

“We will thoroughly vet Kim if he has the abilities and qualifications to oversee state affairs,” Representative Park Ki-choon, floor leader of the DUP, said yesterday. “We picked veteran lawmakers who can scrutinize Kim on various issues involving family assets and draft dodging of his sons.”

A team of public servants assisting Kim’s preparation for the upcoming confirmation hearing at the National Assembly issued a press release Sunday to calm the accusations.

Kim was also accused of evading inheritance taxes by purchasing a real estate property in the expensive district of Seocho, southern Seoul, under the names of his sons. It was purchased in 1975 when the sons were 6 and 8 years old.

The team, however, didn’t mention the inheritance tax evasion allegations.

Another scandal emerged over Kim’s ruling as a Supreme Court justice. Representative Lee Un-ju of the DUP said Kim handed down a shockingly light punishment on the “Hyeongje Welfare Center” incident in 1987, questioning his standard as a judge.

The largest welfare center in Busan housed more than 3,000 low-income children, people with physical disabilities and the homeless under the slogan of “social cleansing” of the Chun Doo Hwan administration.

The brutal reality of the facility was first made public in March 1987 after one inmate was beaten to death and 35 escaped en masse. The human rights abuses of the facility, where 513 died over 12 years, shocked the nation at the time.

While the prosecution asked the court to punish Park In-geun, the operator of the facility, with 15 years in prison, he was ordered to serve 10 years in the initial trial and the punishment was later lessoned to four years in the first appeal.

In the next appeal at the Supreme Court, Justice Kim sent the case back to the high court, denying that Park forcibly confined the inmates.

In the final appeal, the punishment was lessened to two years and six months.

“It is shocking that the Supreme Court justice who made such a ruling was Kim, the symbol of the country’s underprivileged,” said Representative Lee.

Amidst the sharpening attacks by the opposition lawmakers, the Saenuri Party also selected yesterday its lawmakers including Representatives Hong Il-pyo to join the special committee. “It won’t be an easy process,” Hong told the JoongAng Ilbo. “Kim particularly needs to give an honest explanation and issue an apology over the alleged draft dodging of his sons.”

Another Saenuri lawmaker on the committee, Representative Lee Jin-bok, also said it won’t hurt Kim’s chance for a smooth confirmation hearing if he issues an explanation and seeks the people’s understanding.