Acid leak at Samsung’s plant leads to a fatality

Acid leak at Samsung’s plant leads to a fatality 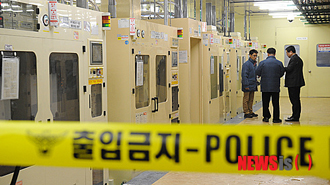 According to the police, the Korea’s technology giant sent the workers to replace a pipe after a leak of the gas was detected from an aged valve on a 500-liter tank containing hydrofluoric acid.

The police estimate the first leak occurred around 11:00 p.m. Sunday followed by a second leak at around 5:00 a.m. yesterday. Samsung said in a statement that a minimal amount of two to three liters of the acid was leaked and no damage to the plant was done.

The five workers are employed by Samsung’s subcontractor STI.

It was only after the workers went home that they realized they had been exposed to the gas. They started feeling dizzy and were brought to Hangang Sacred Heart Hospital in Yeongdeungpo District, western Seoul, according to Yonhap News Agency.

The worst affected worker, a 34-year-old surnamed Park, died at 1:55 p.m. yesterday from exposure to the gas.

The other four workers returned to their homes following treatment, the chipmaker said.

Samsung Electronics said they thought the leak was totally contained in its facility. After the worker died, it reported the accident to the provincial authorities at 3:00 p.m.

The authorities have notified residents of the surrounding area and are looking into the exact cause of the leak.