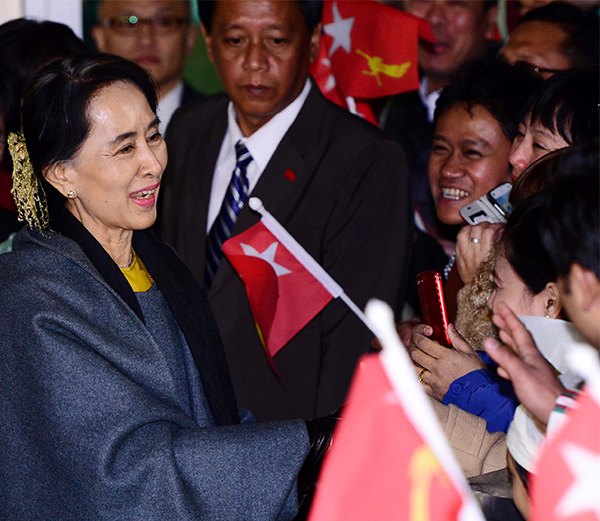 
Aung San Suu Kyi, a pro-democracy leader in Myanmar, arrived in Seoul yesterday for a five-day trip that includes meeting President-elect Park Geun-hye, attending the opening ceremony of the Pyeongchang Special Olympics World Winter Games, and visiting the May 18 National Cemetery in Gwangju. It is Suu Kyi’s first official visit to Korea.

“Upon an invitation by the Korea Foundation, Aung San Suu Kyi will stay [in Korea] until Friday and meet with President-elect Park, National Assembly speaker [Kang Chang-hee], and Seoul mayor [Park Won-soon],” Seoul’s Ministry of Foreign Affairs and Trade said in a statement. “She will also visit Gwangju and receive in person the Gwangju Prize for Human Rights that she was awarded in 2004 when she was under house arrest.”

Suu Kyi, 67, lived the life of a scholar and an ordinary housewife in the U.K. until 1988 when her mother collapsed due to a stroke. She returned to Myanmar to look after her mother and that’s when she devoted herself to the democratization movement. She had been placed under house arrest by the military junta for 15 years and was freed in 2010.

Today, after meeting President-elect Park, Suu Kyi will head to Pyeongchang in Gangwon to attend the Special Olympics. Tomorrow, the leader of the National League for Democracy party will give a keynote speech at the Global Development Summit on the sidelines of the sports event.

Around 300 leaders from Korea and abroad will participate in the summit and discuss measures to improve the lives and environment of people with intellectual disabilities.

In the afternoon, she will receive an honorary doctoral degree from Seoul National University in recognition of her contribution to promoting human rights and education and give a lecture on Asia’s democracy and development.