Man admits to torching of 38 buses

Man admits to torching of 38 buses 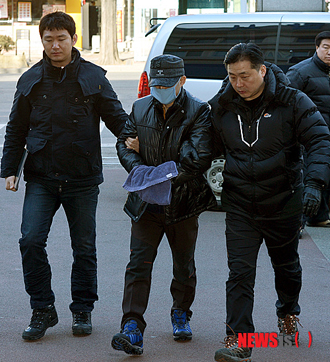 A former bus driver suspected by authorities of starting a fire at a bus yard on Jan. 15 that torched 38 buses, causing 1.5 billion won ($1.37 million) in damage, confessed Sunday that he was behind the arson attack.

The confession by the 45-year-old former bus driver, surnamed Hwang, came weeks after the Gangseo Police Precinct began to question the former driver, who was fired by the Youngin Transportation Company after he had a fatal accident in June of last year, killing a pedestrian.

Since the blaze that completely burned down 30 vehicles and damaged eight others in Gangseo District, western Seoul, the Gangseo Police Precinct have accused the disgruntled man of committing the arson that caused a delay of some bus lines the next day.

The suspect had denied the crime but changed his mind Sunday night and confessed.

“The suspect was under a lot of emotional pressure as evidence collected by the police against him was mounting,” said detective Lee Kyun-hwa at a press briefing yesterday.

The detective added that police confirmed with CCTV footage Hwang left his house in his Matiz car at around 11:16 p.m. on Jan. 14 and drove about 430 meters (470 yards) away from the bus yard, at around 2:37 a.m., just before he set the fire.

The authorities reported Hwang carried out the attack because of a grudge against his former employer. He was let go by the company after the accident last year.

Hwang’s animosity toward the company seems to have deepened after Youngin appealed the decision by the Seoul National Labor Relations Commission made in October of last year that Hwang’s dismissal should be reversed, according to the police.

The police added they have not ruled out the possibility Hwang had an accomplice.