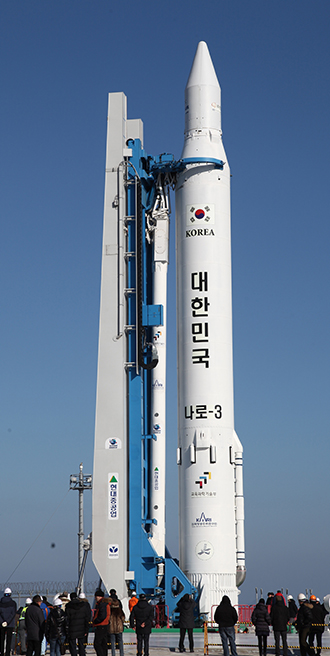 The Korea Space Launch Vehicle-1, also known as Naro, was erected yesterday on the launch pad at the Naro Space Center in Goheung, South Jeolla. [NEWSIS]

South Korea has nearly completed preparations for what will be the third launch attempt of the Korea Space Launch Vehicle-1 (KSLV-1) yesterday with the space rocket safely fastened to the launch pad.

The KSLV-1, also known as Naro, is set to blast off tomorrow from the country’s Naro Space Center in Goheung, South Jeolla, 480 kilometers (298 miles) south of Seoul. The space rocket was transferred from its storage facility to the launch pad earlier in the day, and was erected on the launch pad, according to the Korea Aerospace Research Institute.

A final launch rehearsal is set to be held early today with the Flight Test Committee and Launch Preparation Committee scheduled to meet later in the day to decide whether the launch will take place as scheduled. The weather conditions are another major factor in deciding on the actual launch of a space rocket. Current weather forecasts predict partly cloudy skies around the Naro Space Center tomorrow. Yonhap