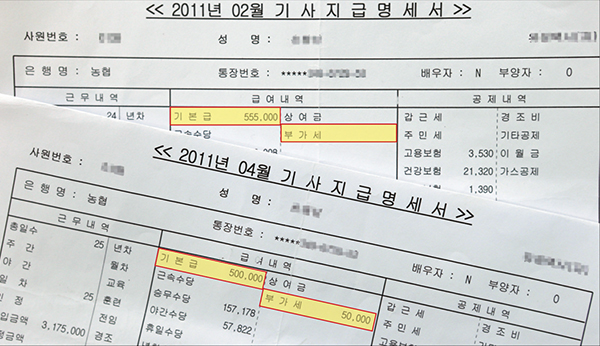 Payment records for February and April of 2011 for a cab driver employed by an Incheon taxi company. The record from February displays the monthly salary of 555,000 won (508 dollar) but with no tax return. The taxi firm then gave out the tax return two months later, which was 50,000 won, but tricked the driver by cutting his monthly wage by 55,000 won. By Kang Jung-hyun

As taxi companies complain about the delay in passage of a legislation that would designate cabs as public transportation, rampant embezzlement has been discovered in their usage of government tax money.

Some 60 taxi companies in Incheon alone have been found to be embezzling value added tax returns from the government.

The returns were intended to help out cab drivers, but as much as 10 billion won ($9.24 million) over the 18-month period from July of 2010 until December of 2011 went into the pockets of the taxi companies, according to a study by the JoongAng Ilbo that evaluated documents on quarterly value added tax returns, which was published yesterday.

From the analysis, it is discovered most taxi companies in the coastal city have inflated the number of employed cab drivers so they could receive more tax money, to the tune of hundreds of millions of won for some firms. The documents were handed over by the National Union of Taxi Drivers, an affiliate of the Korean Confederation of Trade Union.

As of late 2011, approximately 5,300 taxi drivers were registered with the state-run Korea Transportation Safety Authority.

But tax return records written during the same period falsely claimed taxpayers’ money was distributed to around 9,200 drivers, meaning that the taxi firms in Incheon misappropriated tax benefits for 3,900 drivers.

Given that monthly tax return to an individual driver is between 100,000 and 170,000 won, it can be figured that as much as 8 million won a year in tax returns went straight into the pockets of taxi company owners in Incheon.

The fraudulent practice is not only confined to Incheon. After looking into the books of three taxi companies in Seoul (in which there are 255 taxi companies) it did not take long for the JoongAng Ilbo to discover tax returns for as many as 130 cab drivers were embezzled, while on the paper it says all the money was delivered to the drivers.

An Incheon city official told the JoongAng Ilbo that it is difficult for officials to thoroughly examine the authenticity of the numbers submitted by taxi firms as it is part of administrative work. The city government does not have the investigative authority to dig deeper into the numbers.

Many taxi companies recruit undocumented drivers, a practice that is illegal, to embezzle the tax money.

With this trick, one taxi firm in Yangcheon District, western Seoul, took in 160 million won over a 10-month period from July of 2011 to April of 2012. Given that the number of such undocumented drivers is estimated to be at around 5,000 in the capital, tax payers’ money embezzled by the owners could be as much as 8 billion won.

The string of allegations surrounding the fraudulent acts by the taxi firms has always been going on for years, not only in the capital area but throughout the country, prompting the legislature to agree on abolishing the tax benefits by the end of this year.

But politicians are now discussing extending the benefits. Last year alone, 180 billion won in taxpayer money was given out to the taxi companies, intended to help out taxi drivers.

For example a 61-year-old former taxi driver, who refused to disclose his name, drove a registered cab until May of last year and was never aware of the fact that he was even entitled to monthly tax returns.

It was during his legal fight with his employer over its refusal to pay him a retirement pension that he came to realize he was supposed to have received 8 million won from the company in tax returns, all of which was embezzled by the former employer.

Now, after fighting with the company for more than half a year, the former cab driver feels public officials are on the side of the taxi industry. “I feel like no one is there to help out taxi drivers, but only those who run the taxi business.”

Some point to inappropriate relations between government officials and taxi industry managers that are maintained by consistent kickbacks.

“I have heard from a bookkeeper that during big national holidays, each taxi company owner gives out 2 million won to the taxi association to bribe officials in charge of transportation policy at the Ministry of Land, Transport and Maritime Affairs,” said a union official at one of the taxi companies in Incheon, who asked not to publicize his name.

With a series of allegations reported to the authorities on fraud, the police are set to expand its investigation nationwide to bust taxi firms embezzling tax returns.