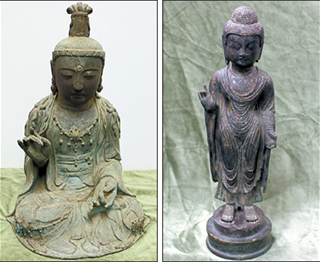 A seated Buddhist bodhisattva, left, and a gilt bronze Buddha, right, were stolen from Japanese temples on Tsushima Island last October and smuggled back into Korea by thieves through Busan. Provided by the Cultural Heritage Administration

Two Buddhist statues from the Silla (57 BC to AD 935) and Goryeo (918-1392) dynasties were stolen from Japanese temples last year by a team of Korean professional art thieves and shipped back to their homeland through the port of Busan.

They slipped through Korean customs because the thieves claimed the statues were “forgeries.”

In fact, they are deemed important cultural properties by Japan and are worth billions of won.

A 69-year-old professional art thief surnamed Kim last August met with an art distributor acquaintance, 51-year-old Yim. Surfing the Internet, they tracked down three temples on Tsushima Island, between Japan and Korea, that had statues designated by Japan as important tangible cultural properties.

They confirmed that the statues were of Korean origin, and then assembled a team of nine for the heist, each member specializing in a different area such as finance, stealing or transport.

Another man surnamed Kim, 50, was in charge of the team and scouted the area beforehand.

On Oct. 3, Kim and three other members of his team went to Tsushima via Busan and three days later stole the two statues and a collection of Buddhist sutras from three temples. To steal the sutras, they broke through the tile roof of a building.

Two more members of the gang joined the four and they left Tsushima by boat the following day, bringing the stolen artifacts to Fukuoka because its customs don’t inspect rigorously.

The crew departed Fukuoka for Busan on Oct. 8.

At Busan, they fooled customs by claiming the artifacts were “forgeries that were not even 100 years old.”

“When the cultural asset evaluation officials at the Busan Main Customs examined them with the naked eye,” said Huh Jong-haeng of the Cultural Heritage Administration, “the statues were covered in dirt and rusty, so they figured they were indeed fake.”

Regulations simply required the thieves to pay some tax for antiques less than a century old.

After passing through Busan customs, the crew transferred the artifacts to a storage area in Masan, South Gyeongsang.

One statue is a 45-centimeter (17.7-inch) tall Buddha reported to have been made in the 8th century during the Unified Silla Dynasty. In 1974, Japan transferred the statue to its home on Tsushima in Nagasaki prefecture. At that time, its appraised value was 100 million yen, or $333,000.

Korea had lost track of the two pieces. It’s not known when Japan stole them from Korea.

“The Buddha statue is voluminous and the folds in the cloth are well represented, representative of the Buddhist statues of the 8th century in the Unified Silla Dynasty,” said Jung Eun-woo, a Buddhist artifact expert at Dong-A University Museum. “But it is unusual because it is larger than the statues of that period, which were usually 20-30 centimeters.”

The second statue is a 60-centimeter seated Bodhisattva made around 1330 during the Goryeo Dynasty, and experts said it is much more valuable than the first. On Dec. 17, the Japanese government requested Korea to investigate into the missing artifacts and have them returned.

The police and the Cultural Heritage Administration began an investigation and caught Kim and the others as they looked for buyers. Police arrested four of the thieves including 69-year-old Kim, but are on the lookout for the rest of the accomplices.

The artifacts are safe and in the custody of the Cultural Heritage Administration.