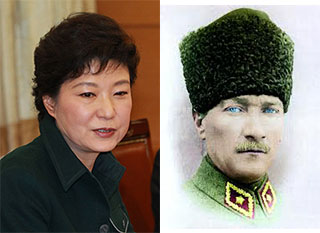 When president-elect Park Geun-hye began her political career, she said, “I will continue my father’s unfinished legacy.” Park Chung Hee and Park Geun-hye remind me of Mustafa Kemal Ataturk, the founding father of modern Turkey, often referred to as Kemal Pasha. He was a military leader who drove off the Greek forces. In 1922, his coup abolished 600 years of the Ottoman Sultanate. Park Chung Hee had led the Marine unit and crossed the Han River Bridge in his coup.

A history of Kemal Pasha by a BBC correspondent describes the establishment of a modern republic and economic development. Of course, Kemal Pasha is also remembered as a dictator, as he purged his opponents and served three consecutive terms as a lifetime president. Park Chung Hee was not much different. However, their fates ended in different ways. In order to save the republic, Kemal did not have children as he was worried that if he had any, they may want to succeed him. He ended 1,000 days of marriage and remained single for the rest of his life. He handed over all his personal property to the government and ordered no memorial be built for him. His will resembles that of Alexander the Great, who wished his body be buried in the ground but his two empty hands to rise out of the grave.

In 1925, Kemal implemented dress reform. Muslims line up at mosques and put their foreheads on the ground when praying. So they traditionally wear rimless hats called fez. However, the hat does not block the sun on a hot day. Kemal proposed they wear Western-style hats instead of fez. The Hat Law of 1925 was met with fierce opposition, similar to the ordinance prohibiting the topknot in Korea. Every year, some 20 people were executed for violation of the Hat Law.

An even more serious issue was the ban on religious coverings on women like hijab. Kemal wished women to be able to see the world as well, but it was a sensitive issue to force it on women. So he came up with an interesting law that all prostitutes must wear hijab at all times. His political imagination led to a surprising outcome. Turkish women voluntarily abandoned the covering. Park Geun-hye emphasizes law and principles, but she should pay attention to Kemal’s clever solution.

Kemal always had Mustafa Ismet Inonu by his side. He was a gunnery officer who was partially deaf. At the negotiation for the Treaty of Lausanne, Ismet turned off his hearing aid and refused to listen to the British foreign secretary when he was pressured. An Italian sculptor who was invited to Turkey sent a secret message to Mussolini that Kemal was immensely fortunate to have Ismet by his side, as he perfectly complemented Kemal’s flaws with outstanding insight and flexibility. Park Geun-hye may have had Ismet in mind when she chose Kim Yong-joon, who also wears a hearing aid, as the prime minister.

Ismet served as the prime minister for a long time, and he used to drink with Kemal and spoke frankly. But the next day, he would send a letter of loyalty, saying he was afraid he may have made unpleasant remarks because he had a hearing problem. Kemal would respond, “Can you believe I cried after reading your letter? I like you very much.” Ismet believed in realism and supplemented Kemal’s idealism. He succeeded the presidency and served for 12 years. Following Kemal’s will, Turkey strictly remained neutral during World War II.

In Turkey, Kemal is still a legendary figure. The wall clock in Dolmabahce Palace is still set at 9:05 a.m., the time he died on Nov. 9, 1938. The Turkish criminal law states that insulting his legacy is a crime against the state. Park Chung Hee considered Kemal a role model in his lifetime. However, his legacy is not on par with that of Kemal. It now depends on Park Geun-hye to complete the remaining half of the legend.

Two years ago, Park Geun-hye paid a visit to the “brotherly country.” The Turkish government welcomed her by turning on all the chandeliers in Dolmabahce Palace. What was she thinking in the magnificent Turkish palace? I wonder if she thought about Kemal’s outstanding political imagination and insight to promote competent aides. However, I cannot help thinking she isn’t yet half the leader Kemal was.