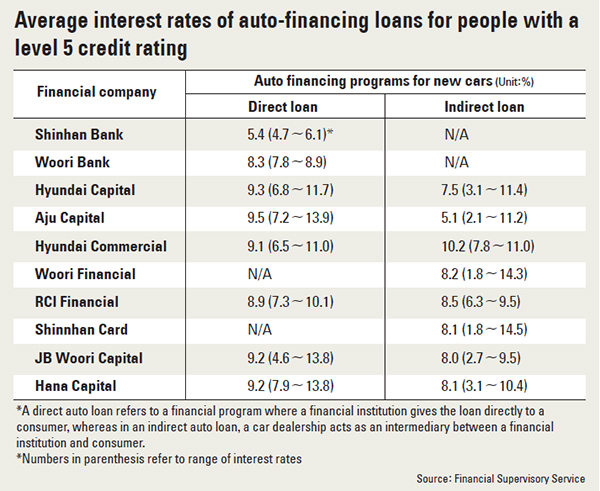 According to a new consumer report by the financial watchdog, banks offer annual interest rates of between 5.4 percent and 8.3 percent for customers with a credit rating of level five seeking direct auto financing to purchase a new car.

But borrowers who head to credit card and other capital companies have to pay between 8.9 percent and 9.5 percent.

The rates are even higher for used cars, it said.

Local credit raters evaluate individuals on a scale of one to 10, with 10 being the worst.

For new cars, Shinhan Bank offers the lowest rate of 5.4 percent for direct auto financing, while Aju Capital has the highest rate of 9.5 percent.

For used cars, Shinhan has the most attractive rate (6.7 percent) and RCI Financial the most onerous (24.1 percent), the FSS said.

Under direct auto financing, the loan is made directly to the consumer, whereas an indirect auto loan has a car dealership act as an intermediary between the two parties.

The FSS said it will also ban financial institutions from charging separate transaction fees for the loans from March.

It said they deliberately omit these when calculating the interest rates for the loans, generating confusion among the public. They must now include them in the rates.

“The transaction fees vary from 600,000 won to 2.5 million won, depending on the model,” said Kim Yong-woo, an official at the FSS.

“The average interest rate for indirect auto financing loans from credit card firms and capital companies was 7 percent from July to September. But when handling transaction fees are included, this rise by two or three percentage points. This means consumers are paying more than what they expected, and the financial institutions have been taking advantage of the complex nature of the contractual terms.”

The report cited one customer who took an indirect auto financing loan for 23.4 million won out from a capital company on a 48-month repayment plan after learning that the interest rate was 7.6 percent. He was later asked him to pay another 1.5 million won, equivalent to 6.4 percent of the loan, as a handling fee.

“Interest rates for such loans vary depending on the length and method of repayment, and borrowers’ credit scores,” Kim said. He urged customers to log on to www.crefia.or.kr to compare rates.