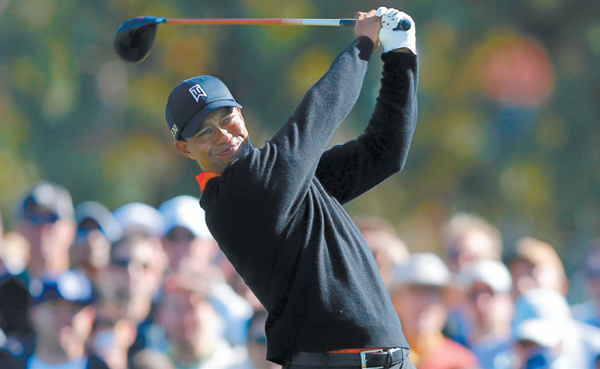 SAN DIEGO - Tiger Woods was so good for so long at Torrey Pines that it didn’t matter how bad it looked at the end.

In a finish that was fitting for such a long and exasperating week, Woods built an eight-shot lead with five holes to play on Monday until he lost patience with the slow play and started losing shots that only determined the margin of victory.

Despite two bogeys and a double bogey in the final hour, he closed with an even-par 72 for a four-shot victory in the Farmers Insurance Open.

“I’m excited the way I played all week,” Woods said. “I hit the ball well - pretty much did everything well and built myself a nice little cushion. I had some mistakes at the end, but all my good play before that allowed me to afford those mistakes.”

He won for the 75th time in his PGA Tour career, seven behind the record held by Sam Snead.

Woods won this tournament for the seventh time, and he set a PGA Tour record by winning at Torrey Pines for the eighth time, including his 2008 U.S. Open. Woods also has won seven times at Bay Hill and at Firestone.

Torrey Pines is a public course that he has turned into his private domain.

“I don’t know if anybody would have beaten him this week,” said Nick Watney, who got within five shots of Woods when the tournament was still undecided until making three bogeys on his next five holes. “He’s definitely on his game.”

It was the 23rd time Woods has won by at least four shots on the PGA Tour. Defending champion Brandt Snedeker (69) and Josh Teater (69) tied for the second. Watney had a 71 and tied for fourth with Jimmy Walker.

It was a strong statement for Woods, who was coming off a missed cut last week in Abu Dhabi, United Arab Emirates. This was the second time in his career that Woods won in his next tournament after missing the cut, but this was the first time it happened the following week.

“I think he wanted to send a message,” said Hunter Mahan, who shares a swing coach with Woods. “I think deep down he did. You play some games to try to motivate yourself. There’s been so much talk about Rory [McIlroy]. Rory is now with Nike. That would be my guess.”

The last time Woods won at Torrey Pines also was on a Monday, when he beat Rocco Mediate in a playoff to capture the U.S. Open for his 14th major.

Of all his wins on this course along the Pacific, this might have been the most peculiar.

Thick fog cost the tournament an entire day of golf on Saturday, forcing the first Monday finish in tournament history. Woods effectively won the tournament during his 25 holes on Sunday, when he turned a two-shot lead into a six-shot margin with only 11 holes to play. AP