Only one ‘PC telecom’ left as Nownuri laid to rest

Only one ‘PC telecom’ left as Nownuri laid to rest 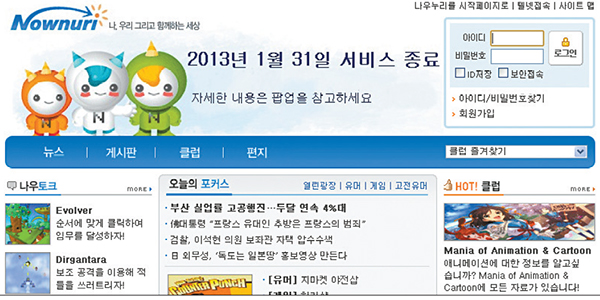 Above is a screenshot taken from Nownuri’s official Web site.

Nownuri, one of three Korean portal sites that originated from terminal-based PC-to-modem telecommunication tools in the early 1990s, is shutting down tomorrow, 19 years after it was launched.

Its closure follows that of Hitel in July. Now Chollian, the first of the three sites to open, is the last man standing. It is run by a subsidiary of LG U+, the nation’s smallest mobile carrier.

Now SNT, which operates Nownuri, announced the service shutdown in December to give users time to download and back up their files and data. Although some users have waged an online campaign to try and get the service period extended, Now SNT said it had no choice amid “aggravating profitability and decreasing users.”

Nownuri, Hitel and Chollian, popularly known in Korea as “PC telecommunications,” were born in the early 1990s and have proven immensely popular among teens and people in their 20s. They emerged as a major pop-culture phenomenon, even inspiring a hit movie in 1997 called “The Contact,” which dealt with a love story between a man and a woman meeting through a PC telecom service.
Users paying monthly subscription fees of several thousand won were able to create Web communities with various themes and chat over the modem connection. Despite the rapid growth of much faster wireless Internet connections in the late 1990s, which helped Korea emerge as the world’s most wired nation, however, those three services were undermined by next-generation Web-based portals such as Naver and Daum.

Freechal, a Web-based community-centered portal site that was established in 1999, is scheduled to shut down on Feb. 18. As the free service started charging users, a massive number migrated over to Cyworld, a similar online community and blog service provider.

Cyworld, run by SK Communications, an affiliate of SK Telecom, has been struggling with decreased users after a variety of social networking sites arose, including Facebook and Twitter, in the past couple of years.