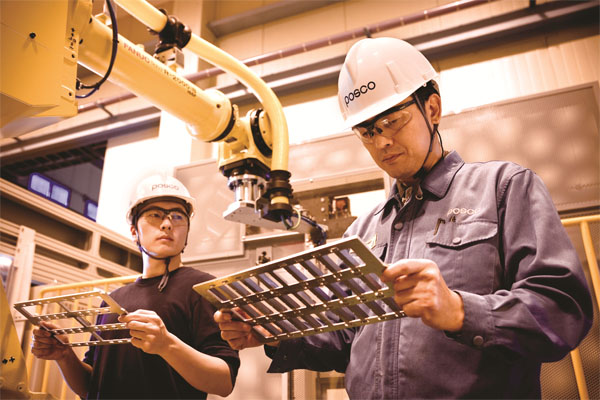 One of Posco’s quality management teams inspects its steel products at a plant in Pohang. The company will invest 8 trillion won (7.36 billion dollar) this year, it announced yesterday. Provided by the company

Posco, the No.1 steelmaker in the country, said yesterday it will make larger investments this year than last in a bid to achieve qualitative growth amid remaining uncertainties in the global steel industry.

In remarks made at the annual CEO Forum at the Korea Exchange in Yeouido, Seoul, the world’s fourth-largest steel manufacturer by volume said it will invest up to 8 trillion won ($7.37 billion) for the entire group.

“Posco will keep making investments in necessary business areas this year, while selling assets that are considered less crucial for the company’s growth,” said CEO Chung Joon-yang. “Although there are some signs of global economic recovery, market conditions for businesses will still be unfavorable throughout the year due to remaining uncertainties.”

The total size of the investment has inched up from 7.2 trillion won last year. The steel-making unit alone will get 4 trillion won, up from 3.6 trillion won in 2012. Around 2 trillion won will be allocated to the company’s material and energy units. The rest will be used for overseas branches. 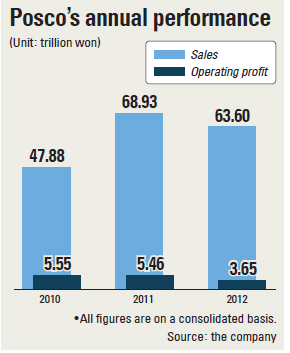 “We will make the investment efficiently and according to our financial ability,” said Park Ki-hong, vice president of Posco. “The investment plan for this year won’t add any financial burden to the company.”

Its target sales for 2013 are set at 66 trillion won on a consolidated basis, slightly higher than in 2012. But the steel unit’s sales goal is 32 trillion won, below what it achieved last year.

“When we first set the target late last year, the situation was very bad, so we made a conservative forecast for this year,” Chung said. “But as the first quarter showed positive signs of recovery - with 3 percent growth in global steel demand - we will keep revising the target.”

“The steelmaker faced lower revenue and operating profit compared to a year earlier, because of steel oversupply and resulting falls in steel prices,” Park said.

Steel prices were slashed by around 100,000 won per ton compared to a year earlier, the company said.

Meanwhile, it has set a goal of cutting 763.9 billion won in costs this year. As part of the plan, Posco will complete its organizational restructuring plan that includes mergers of similar but small subsidiaries and the elimination of unnecessary units. Last year, it embarked on massive restructuring to trim down 70 subsidiaries to 52.

Aggressive acquisitions with CEO Chung at the helm since 2009 have been criticized by local market watchers as a cause of the company’s deteriorating financial health.

It also sold assets worth 2.2 trillion won last year, which it did not consider crucial, to strengthen its fiscal soundness.

According to the company, its debt-to-capital ratio has dropped 6.6 percentage points to 33 percent, while its equity ratio has risen to 74.9 percent, up 3.6 percentage points.?Posco also wants to expand sales of its material unit to 8.2 trillion won this year, up from 5.5 trillion won. It said it expects its gas mine in Myanmar to yield annual revenue of 300 billion after it begins operating in May.