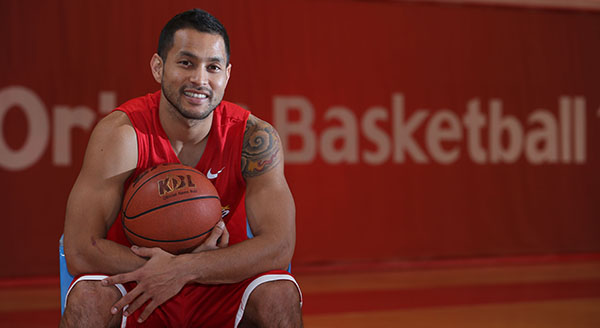 Chon Tae-poong. A point guard for the Goyang Orions

Korea is becoming a more multiethnic country, as was shown by the steadily growing number of children born into multicultural families. There were 20,321 such children in 2010 and the number rose to 22,014 in 2011, according to the Statistics Korea.

Still, in this largely homogenous society, they still face considerable prejudice. One Korean athlete has borne witness to this and is trying to spur change in his own small but significant way.

Chon Tae-poong, a point guard for the Goyang Orions, knew Korea once as his mother’s home and now calls it his own.

“I’m mixed race, but I’m also Korean,” Chon, a naturalized citizen whose father is African-American, said in Korean during a recent interview with the JoongAng Sunday.

“But if I say I’m Korean, customs officials at the airport question me repeatedly. I don’t want them to do that.”

Born under the name Tony Atkins in 1980, Chon settled in Korea in 2009. The Korean Basketball League introduced a draft system for Koreans of mixed blood in 2009, separate from the draft for foreign players, to add more foreign flair to the league.

He was the first pick in the new draft that year, picked by the Jeonju KCC Egis. He moved to the Orions last year.

Chon said that since his move to Korea, he has battled discrimination on and off the court. He mentioned a KBL rule that bans players of mixed blood from playing for the same team for longer than three years. The league has said that such a regulation is necessary to create a level playing field, and Chon had to move to the Orions because of the rule.

“Other Korean players don’t have to move to another team. I’m Korean, so why do I have to?” he said. “I really want to see rules like this corrected.”

He said such discrimination was all too familiar in the U.S. as well.

“There was a problem when I grew up in the U.S.,” he said. “I was not fully African American or fully Korean, so I took a lot of stick for that.”

He was more comfortable with Korean than English when he was growing up in Los Angeles. He spent all day long with his maternal grandmother, who couldn’t speak English, while his parents worked.

Chon had few friends and his classmates at elementary school picked on him, calling him “Oreo” after the black and white colored cookies.

“I was not good at anger management, so I got into a lot of fights,” he recalled.

Language was not the only area in which he faced discrimination, he said.

When he was attending Richards Middle School in Georgia, his school basketball team advanced to the final stage of the state championship, and during the final game a female fan of the opposing team hurled racial slurs at him, calling him both a negro and a chink. He said he could put it behind him because his team won the game.

He said he feels sympathetic towards others from multi ethnic backgrounds in Korea who may be facing similar discrimination.

To help them, he has given game tickets to children from such families. Sometimes, he gives basketball lessons to multi-ethnic kids at elementary schools.

“When I remember my childhood, I imagine it must be very hard for parents of mixed-race children here in Korea. I feel sorry for them,” he said.

Such efforts as these are helpful for children from multi-ethnic backgrounds, according to Jeon Su-gil, who runs Global Friends, an amateur basketball team composed of such kids.

“Children from multi-ethnic families get a lot of courage when they see a famous athlete, who they feel comes from a similar background to them, come and teach them,” Jeon said. “Chon Tae-poong can be a role model for them.”

Chon said basketball has been a huge source of self-confidence for him.

When he began attending middle school in Georgia, he said he went to the basketball team and pleaded to the coach to let him join. The coach turned him down, instead proposing he play with the girl’s team. Undeterred, he approached the girl’s team coach and flaunted his skills. He was invited to join the boy’s team a week later.

“People don’t shun me if I play basketball well. They give me respect,” he said.

“I really like myself when I play basketball. It is my love. I would have been a big problem had it not been for basketball.”

His love of the game led him to Georgia Tech, which has a strong basketball program, and he played there as a point guard for four years. He fell short of making it to the NBA, but played in professional leagues in Russia, Poland and Greece after graduating.

“I played in Europe for seven years, starting with Russia, but at some point I started to hate traveling around,” he said. “I didn’t want to go back to the U.S. I was thinking how it would be to go back to my mother’s country, and then a chance opened up to play here.

“I came to Korea once or twice when I was young, following my mother, and I had good memory of Korea back then.”

He has prospered in Korea. Orions coach Choo Il-seung now calls him the team’s most important player.

The Orions are slumping this season, sitting seventh in the 10-team league, but Chon was named MVP for two of three games when the club enjoyed a recent winning streak this month. He also played in Sunday’s All-Star Game.

Some say he’s living up to his name as Tae-poong is the Korean translation of “typhoon” - a name his Korean relatives suggested in hope he would prove a force of nature in Korean basketball. He said he liked it from the moment he first heard it.

He said he loves life in Korea, has many friends here and likes the food. He married his childhood friend, whom he met in Korea.

She was a neighborhood friend in Los Angeles and he learned she was working in Seoul as an English teacher via Facebook in 2009. He contacted her and they married the following year. Their son, Tae-ryong, was born in May.

He said he wants to live in Korea as long as he can and hopes that by the time his son is grown up, Korea will be a society that embraces all people regardless of their ethnic background.

“We all get punished the same for breaking the law,” he said. “Likewise, I want the same treatment for everyone, whether they’re mixed-race or not.”