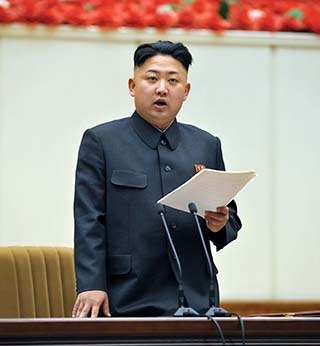 Kim Jong-un, first secretary of the Workers’ Party of North Korea, delivers an opening speech at the Fourth Meeting of Secretaries of Cells of the party in Pyongyang on Monday. [XINHUA/NEWSIS]

Former North Korean leader Kim Jong-il ordered his youngest son to continue to develop not only his nuclear arsenal, but also long-range missiles and even biochemical weapons, in his last instructions before he died.

“Recently, the government obtained the entire contents of the final instructions of Kim Jong-il, which he left two months before he died,” a South Korean government official told the JoongAng Ilbo yesterday.


“We found some comments were consistent with current affairs in North Korea, such as the nuclear weapons program, missile launches and its demand to remove U.S. troops from the South.”

Pyongyang reportedly considers the instructions from the two former leaders, Kim Il Sung and Kim Jong-il, as the final word in their policy-making, overruling even the Constitution.

Last April, the Korea JoongAng Daily reported on the partial contents of a note that was allegedly sent from Kim Jong-il to his sister on Oct. 17, 2011 and obtained by a North Korean defector in the South. 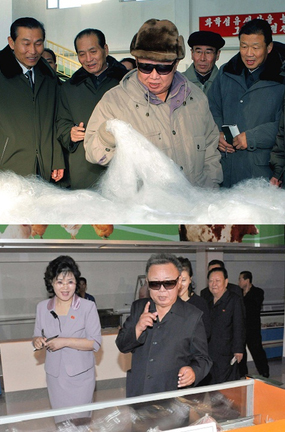 “Although some North Korean defectors and civic activists revealed instructions that were smuggled in from China, we need a verification process to confirm its authenticity,” a source familiar with foreign and national security affairs said.

“We shared the information with officials in other ministries and confirm the recent affairs in North Korea are consistent with the instructions.”

The final instructions, reportedly delivered on Oct. 8, 2011, include 44 specific orders. When it comes to the regime’s defiant nuclear test and missile capabilities, Kim said, “Keep in mind that the way to maintain peace on the Korean Peninsula is to endlessly develop nuclear, long-range missiles and biochemical weapons and possess a sufficient number of them. Don’t ever be caught off guard.” 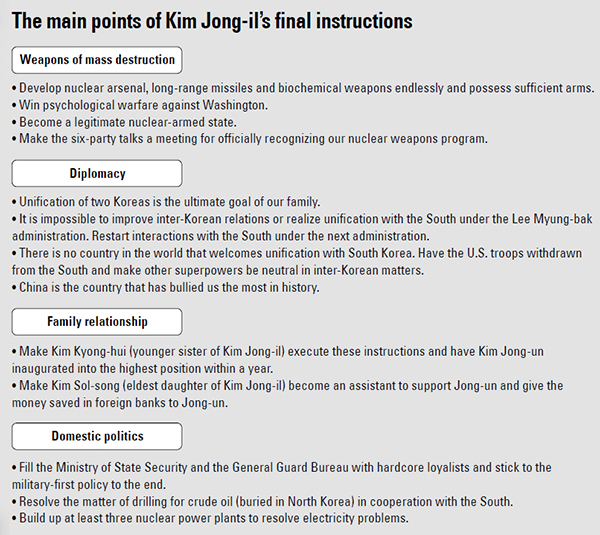 When Pyongyang successfully launched a long-range ballistic rocket, Unha-3, into orbit on Dec. 12, state media praised it by saying “we have realized the last instruction by comrade Kim Jong-il.”

In terms of restarting the stalled six-party talks, Kim wrote “using the six-party talks well is of the utmost importance. We must make these talks not about our denuclearizing, but recognizing our nuclear program officially and notifying the world about it.”

The South Korean government assumes Pyongyang developed its own nuclear program while they were attending the six-party talks and they are now in final preparations for the next stage of their nuclear weapons program.

Kim also urged his son “to win the psychological warfare against the United States” and “make the nation a legitimate nuclear-armed state in order to weaken the U.S. influence on the Korean Peninsula.”

He also ordered his heir to “have international sanctions eased and arrange conditions for economic development.”

About frosty inter-Korean relations, Kim asked officials to give up improving the relationship under the current administration of Lee Myung-bak.

“We need to resolve unification matters by starting with economic and cultural interactions with the next government of the South,” he said.

Still, he stressed that in process of resuming inter-Korean interactions, the North should thoroughly be superior to the South in terms of ideology and dominate Seoul’s military.