President Lee Myung-bak yesterday granted special pardons to associates convicted of graft as well as politicians close to President-elect Park Geun-hye and the late President Roh Moo-hyun in defiance of protests from his successor.


Both Choi and Chun were convicted of receiving bribes in influence-peddling cases. 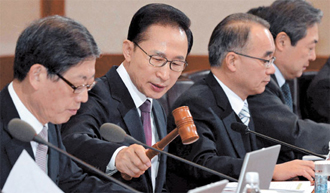 “[President-elect] Park expressed grave concern that people convicted of corruption were among those who received pardons,” Cho Yoon-sun, Park’s spokeswoman, said yesterday. “Lee ignored public sentiment and abused his presidential power by pushing forward the pardons. It won’t be easy for him to avoid the people’s criticisms.”

Park warned Lee Monday in an unusually sharp message to be careful about his pardons, telling him to avoid “abuse of presidential power.”

At the cabinet meeting, Lee made the rare move of explaining the reasons behind his pardons.

“When I took this office, I promised to not abuse the presidential authority for special pardons, particularly over abuses of power that took place during my term,” Lee was quoted as saying by his spokesman. “These pardons were granted based on that principle.”

Lee stressed that he tried to be transparent by asking an evaluation committee that included many outside members to review the list. It was the first time that the presidential pardons were decided through such a process, he said.

Lee said he didn’t include any of his relatives or people convicted in the savings bank scandals or the scandal over illegal spying on citizens. He said some business lobby groups were granted pardons at the recommendation of the major business groups.

For the sake of social unity, Lee said he granted special pardons to five people jailed over the deadly clashes between the police and squatters in Yongsan, central Seoul, in 2009.

According to the presidential spokesman, the cabinet was not originally scheduled to review the special pardon plan, but the justice minister presented it. It was reviewed and approved at the meeting, he said.

Of the 55, 16 convicts will be released from jail tomorrow, while the remaining prison terms for three people were cut in half. For 18 people who received suspended sentences, their sentences will be expunged.

Another 18 people who completed their sentences will be rehabilitated.

The ruling and opposition parties slammed Lee for the pardons.

“Except for Lee’s close associates, everyone else opposed these special pardons,” said Representative Park Ki-choon, floor leader of the opposition Democratic United Party. “Not even a king from the Joseon Dynasty went this far. The people disagree, the National Assembly opposes it and even the president-elect is rejecting it. He must reconsider.”

Lee’s own ruling Saenuri Party also criticized him. “The Blue House defied the people directly by granting special pardons to the president’s close associates who were convicted of abuse of power,” said Representative Lee Sang-il, spokesman of the party. “It is an abuse of presidential authority and against judicial justice.”

The spokesman also made clear the party’s disappointments at Lee’s timing. “It goes against the people’s desire for reform in politics in time for the launch of the new administration,” he said. “The Saenuri Party has no choice but to express strong discontent.”

Some critics pointed out that a cousin of Lee’s son-in-law was pardoned. Cho Hyun-joon, president of Hyosung Group, convicted of embezzling $5.5 million from the company to purchase real estate in the United States, was one of the 55 on the list.

“He received the pardon because he is a businessman,” an official at the Ministry of Justice said.

“Because he is a cousin of the president’s son-in-law, technically he is not a presidential kin.”