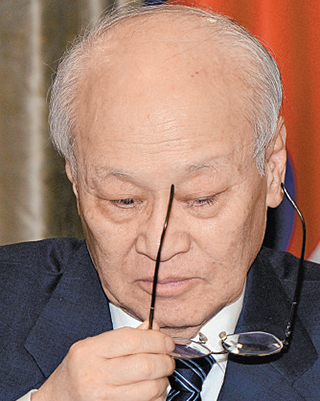 President-elect Park Geun-hye’s choice for prime minister, Kim Yong-joon, gave up his nomination yesterday after less than a week of scrutiny by media and lawmakers.

In an urgently called press conference, Yoon released a statement from Kim that read, “I decided to give up the nomination for having troubled the nation and Park due to my lack of virtue.”

The 74-year-old nominee has been fighting a series of allegations raised by media and the opposition Democratic United Party. His two sons were accused of dodging military service while his family wealth was questioned. The former veteran judge was also criticized for some of his past rulings.

In his short statement, Kim said the media had gone too far. “I want to use this opportunity to make a request to the press,” he said. “Although the intent was to satisfy the people’s right to know, the media must criticize someone with reports on clear grounds and with respect to the subject’s character. I also hope confirmation hearings proceed to serve their initial purpose.”

Park made a grand announcement Thursday nominating Kim to oversee the incoming government in an expanded prime minister’s role. Opposition lawmakers initially showed reserved objections to the choice. But the situation quickly soured over the weekend as media questioned Kim’s integrity.

According to Yoon, Kim said it will be up to Park as to whether she keeps him as head of the transition team.

“Kim met with Park in the afternoon and expressed his intention to give up the nomination,” Yoon said. “I met with him at 6:08 p.m. and coordinated this announcement.”

Park’s reaction to Kim’s decision was not immediately available.

Yoon said no decision was made on selecting a new prime minister.

In the past, prime ministerial nominees have given up their bids after fierce grilling at National Assembly confirmation hearings. But this was the first time a nominee gave up even before the hearing process.

Kim’s decision was expected to fuel criticism of how Park makes and vets appointments.