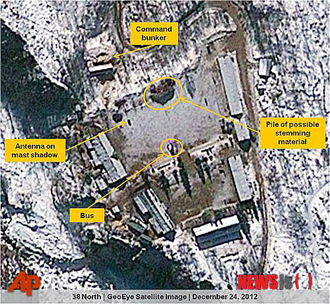 There will be “significant action” taken by the United States should North Korea launch a nuclear test that violates the United Nations Security Council resolutions, Victoria Nuland, spokeswoman for the U.S. State Department, said Monday.

“The statements that North Korea has made have been needlessly provocative, and any test would be a significant violation of UN Security Council resolutions,” she told reporters in a regular press briefing in Washington. “And as we said in Resolution 2087, we will take significant action if they launch.”

In response to the North, 15 members of the UN Security Council, including South Korea, the United States and China, adopted a new resolution, No. 2087, on Jan. 22, adding more North Korean entities and individuals to its blacklist.

It was the fifth UN resolution dealing with the North’s nuclear and long-range rocket launch activities.

Pyongyang, under young leader Kim Jong-un, has maintained a firm stance on developing its self-defense capabilities, including its nuclear weapons program. It denounced the new UN sanctions and pledged it will “give up denuclearization” efforts. The regime also said that the U.S. is the target of its nuclear test.

“All of these things [statements by North Korea] are needlessly provocative and don’t do anything to improve the lives of the North Korean people,” Nuland said.

It is thought that Pyongyang is preparing for its third nuclear test, following its previous ones in 2006 and 2009. After the North’s first nuclear test on Oct. 9, 2006, the UNSC unanimously adopted Resolution 1718, imposing sanctions that prohibit the North from accessing heavy weaponry and equipment that “might contribute to the North Korean nuclear and weapons of mass destruction programs.”

The UNSC also called for the North to return to multilateral talks. When the regime went forward with its second test on May 25, 2009, the UNSC adopted Resolution 1874, strengthening the established Resolution 1718.

Officials involved note that these kind of sanctions on Pyongyang help slow down the regime’s development of nuclear weapons.

Kim Sook, South Korea’s ambassador to the UN, told reporters in New York that the international body “will immediately take counter measures” should the North conduct a nuclear test. His comments came as South Korea will assume the month-long rotating presidency of the council in February.

“Our military is preparing for not only [the North’s] nuclear test but also others including various provocations, terror and cyberattacks,” said Kim Min-seok, spokesman at the Ministry of National Defense.