Two ‘daughters of the East’ meet for first time

Two ‘daughters of the East’ meet for first time 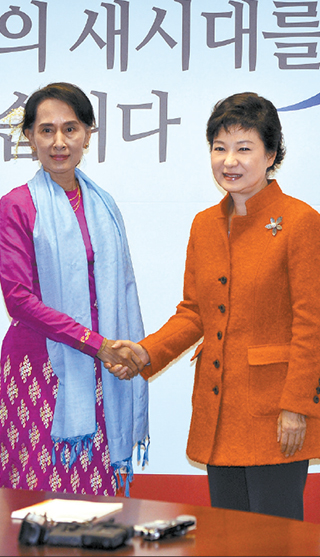 President-elect Park Geun-hye yesterday met Myanmar’s democracy icon Aung San Suu Kyi and promised to work with her to make their countries, Asia and the world “freer and happier.”

In their meeting at Park’s office, the president-elect congratulated Suu Kyi for her and her party’s victories in last year’s by-elections.

“I think it was an important first step for Burma’s democratization,” Park said.

Suu Kyi replied that she sees it as an auspicious sign for her country’s future.

During their exchange, both Park and Suu Kyi referred to Myanmar as Burma.

“I am paying my respect for your deep and long-time sacrifices for your homeland’s democracy,” Park told Suu Kyi. “I also understand very well what it is like to give up happiness as an individual and live a life by having the nation as my family. I hope we can work together to make a freer and happier Korea and Burma, Asia and the world.”

Suu Kyi said the peace and prosperity she works for are not just for Myanmar but for the world.

Park said she has paid special attention to the latest efforts of Myanmar to improve its relationships with Western countries including the United States. Korea has also joined the international efforts to improve Myanmar’s situation, Park noted.

Park stressed that Korea will start its term as a nonpermanent member on the United Nations Security Council this year and promised further cooperation between the two countries in the international arena.

The two women leaders share some similarities having both followed their fathers into politics. Park, 60, is a daughter of former military ruler Park Chung Hee, credited for Korea’s economic development but criticized for his authoritarian rule.

Suu Kyi, 67, is a daughter of General Aung San, a revolutionary known as the Father of modern-day Myanmar. He was praised for his role in the country’s independence from British colonial rule.

Both Park and Suu Kyi lost their fathers in assassinations.

Earlier in the morning, Suu Kyi met with President Lee Myung-bak. It was their second meeting since Lee visited her in Myanmar last May.

She will attend the Global Development Summit on the sidelines of the sports event in Pyeongchang today and visit Gwangju, a symbolic city of Korea’s democratization, tomorrow.

On her last day in Korea, Suu Kyi will pay a visit to Lee Hee-ho, widow of former President Kim Dae-jung.