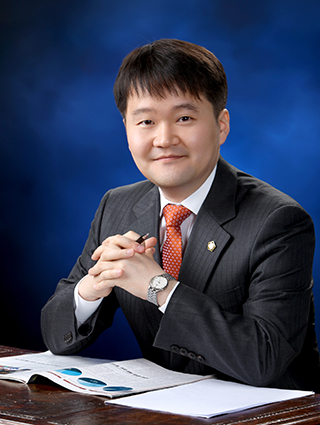 The century-old Seoul Bar Association picked its youngest lawyer yet as its new president Monday.

Na Seung-chul, a 36-year-old attorney with just four years of experience, breaks the mold even further by not being a Seoul National University law department graduate.

The most youthful president of the Seoul Bar previously was Lee Jun-beom, who was 49 when elected in 2005.

At a time of change in the industry, including the entrance of foreign firms and job insecurity in a saturated market, association of lawyers are changing with the times.

Just last week, the Korean Bar Association directly elected its president for the first time. The new president, 55-year-old Wui Cheol-hwan, earned strong support from rural attorneys. He is also from the countryside, has no background as a judge or prosecutor and also did not graduate from Seoul National University’s law department.

Na was elected with the support of young lawyers in their 20s and 30s, who comprise a third of the Seoul Bar Association. This young group has less than five years of experience practicing law and no experience as prosecutors or judges.

In the Monday election, Na beat three rivals in their 40s and 50s, winning 1,443 votes out of 4,406 ballots. “Gone is the era that Seoul National University law department graduates first become prosecutors and judges then practice law,” he said. Na wants to do away with the practice of selecting prosecutors straight out of law school.

Na, a graduate of the Korea University law department, began practicing in April 2009. He wants to return to the old nationwide bar examination system, which was open to everyone and is currently being phased out by 2018 to be replaced with a new system in which only graduates of a three-year, U.S.-style law school implemented since 2009 can take the new bar exam.

“We have to be truthful,” said Na. “Starting from last year, law school graduates began to pour out and the prerogative of lawyers is gradually crumbling away.” He pushes for limiting the number of lawyers produced every year to 1,000.

Na said yesterday he will “express [himself] gently and act with prudence.”

The president of the Seoul Bar Association oversees some 9,100 lawyers, 70 percent of all lawyers in the nation.