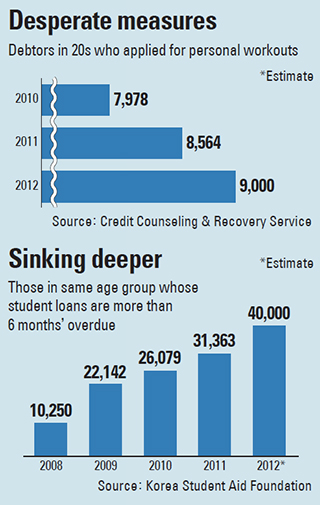 A 29-year-old job seeker surnamed Kim took over 30 million won ($27,700) of debt three years ago from his parents who used to run their own business but could not pay back the loan they made under Kim’s name.

Kim, then a college student, paid the interest on the loan by doing three to four part-time jobs at a time, but it was not enough.

Despite having such difficulties, Kim did not stop studying. He believed he would be able to pay off the debt after graduating from college and landing a decent job.

However, his hopes were completely shattered when he jumped into the job market after graduation.

For every job position he had applied for, all he received were notifications saying he did not get the job.

“Companies did not try to hire me after learning that I have unpaid debt,” Kim said.

Even after graduating from college, he is still working many part-time jobs.

“There is no way to escape from this debt. I feel lost when I think about the future,” he said.

Debtors in their 20s are being driven to the edge of a financial cliff. More people in this age group are getting trapped in a vicious circle of being unable to land well-paying jobs and sinking deeper into debt.

According to the Financial Supervisory Service (FSS), total borrowing by debtors in their 20s amounted to 9 trillion won as of the second quarter of last year, while the number of defaulters grew to 19,520.

The situation is expected to worsen this year. Four out of 10 college students said they plan to take out loans to finance their tuition in a survey conducted on 760 students by job portal Saramin. Among them, 70 percent said they already did so in the previous semester.

The number of people in their 20s who get bogged down by debt and apply for workout programs is also growing rapidly.

The number of 20-somethings who applied for personal workout programs through the Korea Legal Aid Corporation (KLAC) rose to 210 people, up 50 percent from 2011.

It would have been considerably higher but for the tough eligibility requirements.

People in their 20s who cannot repay their loans have a limited number of choices: A court-appointed personal workout program, a similar plan operated by the Credit Counseling and Recovery Service (CCRS), a debt-restructuring program by the Credit Restoration Fund, or switching over to a so-called “Change Dream Loan.”

However, debtors must have a steady income to be able to apply for any of the workout plans.

For personal workouts, the minimum monthly income of an applicant should at least be 850,000 won. For the “Change Dream Loan,” those with overdue loans cannot apply.

“We know that the conditions are too strict for those in their 20s, who did not even start their careers, but it is inevitable to reduce the debtors’ moral hazard,” said a spokesman at the Credit Restoration Fund.

Even when the debtors in their 20s apply for personal bankruptcy at the court, the authorization rate is low.

The court’s reasoning is that they are young enough to find a way out through some form of employment.

“Applicants in their 20s can have trickier standards in terms of earning capacity compared to other age groups,” said a Seoul Central District Court official.

For those who cannot find financial relief, the tag of debt tends to block them from landing jobs. Most companies do not hire applicants with insolvency records.

“People who are under great strain because of their debts are unlikely to be competent in terms of their job skills,” said a human resources officer at a local company.

Eventually, the majority of debtors in their 20s are destined to flit from one part-time job to another, or to unstable contract-based occupations.

“Policy makers should come up with a variety of solutions, such as supporting employment of the debtors in their 20s who barely scrape by and providing grace periods for them to pay off the debt, until they are stably employed,” said Kim Soon-young, a professor at the Institute of Political Management of Hallym University of Graduate Studies.