As the kids grow up, aging parents ask, ‘What about us?’

As the kids grow up, aging parents ask, ‘What about us?’ 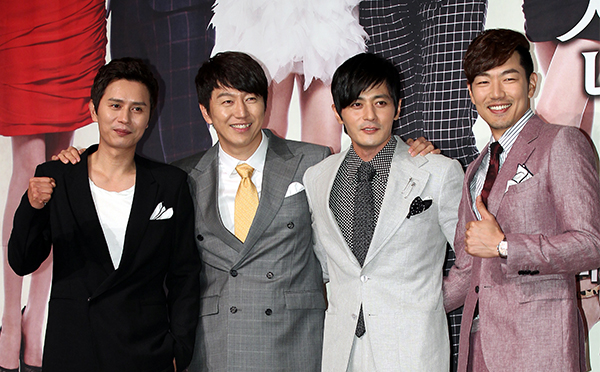 In the 2012 drama “A Gentleman’s Dignity,” often compared to “Sex and the City,” four men in their early 40s, including Kim Do-jin (third from left), pursue a cool and free lifestyle. [JoongAng Ilbo]


“What can I do at this age?” asked Jeong Un-o in “Lover,” an MBC drama produced back in 1996. In doing so, he conceded that as he neared 40, he could no longer live life for himself and instead had to focus on his family.

But times have certainly changed.

Kim Do-jin of the highly rated and more contemporary drama “A Gentleman’s Dignity” has different ideas about his obligations.

“Why would I spend my hard-earned money on a wife and kids?” the character, in his early 40s, demanded in a recent episode.

Instead of giving up cash on luxuries and expensive educations for children, the character wants time and money for himself, eschewing traditions like marriage.

And according to several experts, more and more Korean men in their 40s are starting to think about their own needs - a significant break from the stereotype of child-obsessed parents often portrayed in the media.

One of these rebellious parents is a 47-year-old financial worker surnamed Lee. He recently had a blow up with his wife over something he wanted for himself.

“I just wanted to buy a new down jacket for myself, but my wife said we couldn’t afford it,” he told JoongAng Sunday. “But she spends more than 3 million won [$2,770] per month on private tutoring for our kid.”

Though Lee and his wife each work, their incomes are still not enough to pay for expenses relating to their son. The couple saves less than 1 million won a month.

On the weekend, Lee spends all his time driving his son from one private school to another under pressure from his wife.

“I want to have my life back,” Lee said. “What reward do I get for this? Will my son actively support me when I get older and retire? The younger generation will not support parents eagerly. The parents in our generation need to enjoy life and prepare for retirement.”

According to Lee, a lot of his peers are rethinking their priorities.

“There’s a lot of parents who think like me especially in Gangnam, and the wise ones have already cut their extra expenses for private education for their children,” he said. 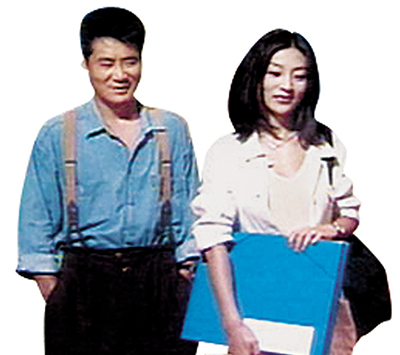 In the 1996 drama “Lover,” hero Un-o, left, thinks he is already past his prime as he nears 40. He gives up his dreams to focus on his family. [JoongAng Ilbo]

Another company worker, surnamed Park, has already reworked his budget.

He has two daughters who go to elementary school and spends less than 500,000 won per month on private tutoring.

Instead, he has decided to focus on music or sports with his children and his wife is teaching English to the girls at home - saving a good chunk of change.

“People in their 40s are part of the last generation to feel obliged to support their parents. This means we can’t expect to receive support from our children as we age,” he said.

The father said he has no plans to spend heavily on private education for his daughters. Expensive classes, he asserted, would not guarantee his daughters’ future happiness. He also said that he did not want to become a financial burden on his daughters in retirement.

Accordingly, he saves 1.5 million won per month even though his family does not have two incomes coming in.

Recently released statistics show a significant drop in the money spent by parents on private education for their children - and those in their 40s are big players in the market.

In total, they spent 13.6 percent of their income on educational expenses in 2009, but last year, the figure decreased to 12.4 percent. About 30 percent of private educational institutions in Daechi-dong, southern Seoul, have now closed.

“Private educational companies are having hard times after the financial crisis in 2008,” said Yang Jeong-ho, an education professor at Sungkyunkwan University. “The biggest reason is the fall in property prices, which has weakened consumer sentiment, and high inflation, which has brought about a drop in disposable income.”

Parents have also begun to realize that their outsized investments on private education may not be that worthwhile.

According to an analysis released by the LG Economic Research Institute in November, 670,000 of college graduates from 2011 were earning less than the tuition paid to universities and other private institutions. Another 1.13 million graduates were unemployed.

As their children are faced with difficult economic prospects, parents are also paying more attention to their retirement savings.

On average, they deposited 135,751 won per month into their pensions in the first three quarters last year, up 36.2 percent from 2009. The amount compared to their income also increased to 2.9 percent from 2.6 percent over the same period.

“The second baby boom generation, the age group from 39 to 45, have more debt and longer life expectancies than the older baby boomers, ranging in age from 50 to 58,” said Hwang Won-kyeong, a researcher at KB Financial Group. “The younger boomers might have realized the necessity of savings earlier than the older segment of the generation.”

Some say the reduction in money spent on their children comes from strong egos and personalities of the generation, since most of the group was born in the 1960s and 1970s.

“They share characteristics from both the younger and older generations,” said Jeong Deok-hyun, the author of “Finding the Hidden 40s.”

People in their 40s tend to be more straightforward and independent in their thinking instead of relying on political policies, so they invest in themselves first, Jeong noted.

Bae Min-geun, a worker at LG Economic Research Institute, said that people in their 40s today are different from members of the older generation who only thought about supporting their children, especially in education. They are also more concerned with their own needs and desires.

“Reflecting this public interest, many books, including those on philosophy and humanities, are aimed at people in their 40s,” Bae explained. 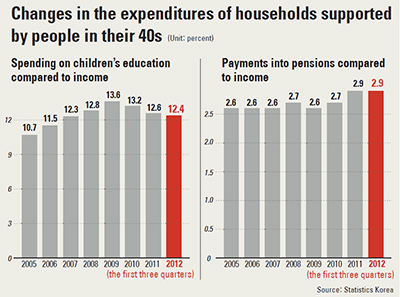 This generation has been exceptionally proud to make investments in themselves - and retailers have also recognized this trend.

At the department store’s branch in Samseong-dong, southern Seoul, 40 percent of those purchasing luxury watches are men in their 40s. At another branch in Sinchon, western Seoul, sales of men’s clothing are up 0.4 percent. That number rises to 4.5 percent when considering only customers in their 40s.

There have also been big changes in the kinds of customers enjoying cultural products such as publications, movies, musicals and dramas.

Maxmovie, a movie ticketing Web site, said that for the first time ever, guests in their 40s made up a bigger proportion of moviegoers (25.8 percent) than those in their 20s (20.1 percent) last year.

This is a seven-fold increase compared to 2002 for the older customers.

The movie “Les Miserables” attracted more people in their 40s as well, at 25 percent of all viewers.

The book, published one month later, sold more than 150,000 copies by taking advantage of this trend.

“People in their 40s are economically well-off, and since they have begun opening their wallets, there has been a noticeable increase in sales,” said Lee Mi-hyeon, communications director at Minumsa, a publication company.

Some are skeptical that parents in their 40s can break the trend by moving away from devotion to their children. It has, after all, been the norm for quite some time.

Roh Ick-sang, the CEO of Hankook Research, a market and opinion research firm, said that most parents in their 40s feel strongly attached to their children, and this naturally leads to higher investment costs in kids.

He said he thinks spending will return to normal as the economy improves.

Only time will tell.