Roaming kitties aren’t as harmless as they appear, study finds

Roaming kitties aren’t as harmless as they appear, study finds 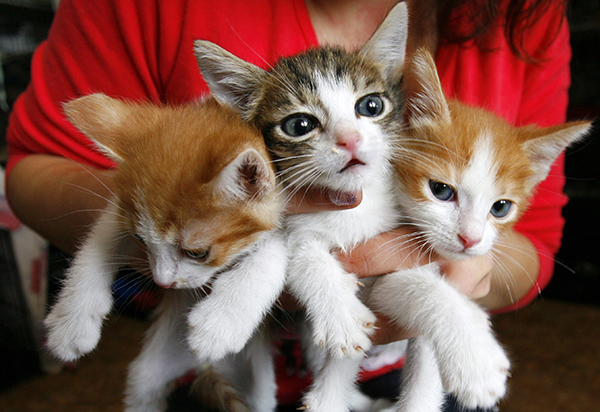 Kittens are held in a private animal shelter, Totoshka, for stray cats and dogs in southern Russia. A new study released on Tuesday said free-roaming kitties are a leading cause of deaths of birds and small mammals in the United States. [REUTERS/NEWSIS]

Such cats are a leading cause of deaths of birds and small mammals in the United States, with pet and ownerless cats blamed for killing up to 3.7 billion birds and as many as 20.7 billion other animals each year, government scientists said in a study released on Tuesday.

Ownerless cats, including barn cats, strays and feral colonies, are behind the vast majority of bird and mammal deaths, according to the study, “The impact of free-ranging cats on wildlife in the United States,” published Tuesday in the online journal Nature Communications.

The study is the first to compile and systematically analyze rates of cat predation. It suggests cats cause “substantially greater wildlife mortality than previously thought,” and are likely the single greatest source of mortality linked to human settlement for U.S. birds and mammals.

The findings by researchers with the Smithsonian Conservation Biology Institute and the U.S. Fish and Wildlife Service show the bulk of birds killed by cats in the United States - excluding Alaska and Hawaii - were native species such as robins, finches and chickadees.

By contrast, cats in suburban and rural areas kill mostly native mice, shrews, voles, squirrels and rabbits, according to the study authored by Peter Marra and Scott Loss of the Smithsonian and Tom Will of the Fish and Wildlife Service’s Division of Migratory Birds.

Domestic cats, introduced globally by humans, are considered among the 100 worst non-native invasive species in the world yet control of the creatures has not been widely addressed by local, state and federal governments, the study shows.

Despite mounting evidence that free-roaming cats are exacting a severe toll on wildlife and contributing or even causing the extinction of some birds, mammals and reptiles, management of cats is strongly shaped by public opinion, or emotion, rather than science, the authors suggest.

“A major reason for the current nonscientific approach to management of free-ranging cats is that the total mortality from cat predation is often argued to be negligible compared with other [human-caused] threats such as collisions with man-made structures and habitat destruction,” researchers concluded.

Birders on Tuesday hailed the study even as lovers of the nation’s estimated 120 million cats assailed it.

The American Bird Conservancy said the new findings should be a wake-up call for cat owners and communities.

“We all love cats, they’re cute, they’re furry, but we can no longer continue to allow these predators to be turned loose on an unsuspecting and defenseless environment,” said conservancy spokesman Robert Johns.

Carol Barbee, past president of the American Cat Fanciers Association, expressed concerns about any study that raises the specter of “killer kitty.”

“Outside cats perform their duty: they catch mice and rats and things that are their job to catch,” she said. “And, yes, they’re going to catch the occasional bird. But I don’t personally believe they’re responsible for mass death and destruction.” Reuters