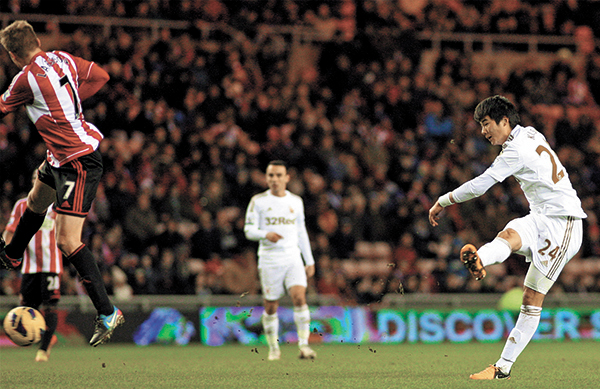 
SUNDERLAND, England - Swansea had to settle for a scoreless draw at Sunderland in the Premier League on Tuesday after Danny Graham was denied a stoppage-time winner for the visitors.

Graham was handed a golden opportunity from close range but his shot was blocked by substitute defender Titus Bramble. Minutes earlier, Swansea midfielder Nathan Dyer had a clear chance and fired wide of the net.

In a classic game of two halves, the visitors failed to make the most of their dominance during the opening 45 minutes, while Sunderland was equally unable to capitalize on its much-improved play after the break.

Both sides remain mid-table, with Swansea moving up to eighth and Sunderland in 11th.

In London, title-chasing Manchester City, poised to sell striker Mario Balotelli, could not crack the resilient Queens Park Rangers in a 0-0 draw against the league’s basement club on Tuesday.

City closed the gap on leaders Manchester United to four points, but a frustrating night for Roberto Mancini’s side in a wet and windy capital handed United the chance to increase their advantage to seven when they host Southampton Wednesday.

“Julio Cesar saved everything and we made some mistakes - on another day maybe we could have scored four goals,” Mancini, who signed Brazilian Cesar back in 2005 as Inter Milan manager, told City’s Web site.

Aston Villa’s season continued to lurch from bad to worse after a 2-1 defeat against Newcastle United dropped the freefalling Midlands club into the relegation zone.

Goals from Papiss Cisse and Yohan Cabaye fired Newcastle into a first-half lead with Christian Benteke’s penalty soon after the restart not enough to save Villa from a fourth successive home league defeat.

Villa players got a standing ovation for their second-half efforts and beleaguered manager Paul Lambert, backed this week by the club’s American owner Randy Lerner, promised to “fight our way out of it”.

Wigan Athletic moved above Villa and out of the drop zone on goal difference after coming from two goals down to draw, 2-2, at Stoke City.

Mancini, who left Balotelli out of his squad with the Italy striker set to move back home to Serie A with AC Milan, went for broke in the second-half with his remaining three frontline strikers Sergio Aguero, Carlos Tevez and Edin Dzeko all on the pitch.

But they were thwarted by sturdy defending and the irrepressible Cesar. A strong penalty shout when Scott Sinclair appeared to be upended was also waved away.

“We did everything to win this game, but we didn’t score,” added Mancini. Mancini said it would be difficult for City to replace Balotelli before the transfer window closed on Thursday.

“I don’t know, we have three strikers, we will see. We have only two days. It’s difficult to get a good player now.” AP, Reuters