Asiana reaches out to prosper in China

Asiana reaches out to prosper in China 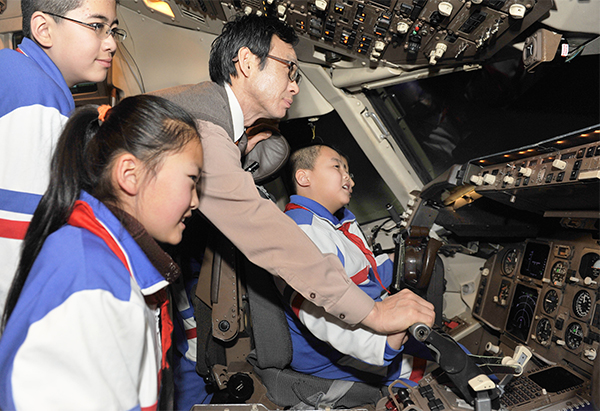 An Asiana Airlines pilot demonstrates a B767 simulator to Chinese students at the company’s headquarters in Osoe-dong, western Seoul, yesterday. The students are from schools that the company is supporting as part of its corporate social responsibility programs. Provided by the company


Asiana Airlines is trying to raise its brand value in China as the company reinforces its social contribution activities to communicate more closely with customers there.

Since last year, Korea’s second-largest airline has been running a project named “Beautiful Classroom” in association with the Korea International Cooperation Agency (Koica). The project aims to sponsor local schools, supplying them with computers, books and other educational resources like musical instruments or sports gear.

Asiana previously announced that each of its 21 branch offices in China will be connected to a school in the region by no later than 2014. Last year, the company was able to sponsor seven schools in cities like Dalian, Nanjing and Changchun.

For the first step in this year, the airline invited 32 students and teachers from its sponsored schools to enjoy a three-day tour of its headquarters and the city of Seoul from Tuesday.

“I was really curious about our supporters, but now I know more about Korea and Asiana Airlines,” Du Yiwei, a 15-year-old middle school student from Yantai, Shandong Province, said yesterday during her visit to the company. “I really want to say ‘thank you’ to them.”

Asiana currently operates more flights to China than any other Korean carrier. It flies 30 routes a total of over 200 times in a week.

“We are looking forward to becoming a company that can create sustainable social value rather than just focus on our economic performance,” said Asiana Airlines CEO Yoon Young-doo. “We hope this project can raise the brand value of Korea as well.”

Although such efforts have not yet translated into better sales, it has led to rewards of other kinds.

Meanwhile, Asiana was selected as China’s most beloved foreign airline at last month’s 2012 Summit Forum, which was organized by the Global Times, an English-language newspaper under the People’s Daily. Top Travel, a monthly industry magazine in China, named it the industry-leading airline in the country.

With the global economic slowdown, fluctuating currency rates and high oil prices, the airline said it is busy preparing for hard times ahead but will press on with its social contributions.

Asiana has been also working with Unicef since 1994 on a campaign called “Change for Good.” The campaign raised over 7 billion won ($6.45 million) via cabin donations last year. The money was donated to Unicef in order to help underprivileged children around the world.

Along with Koica, the airline has also worked to set up solar-powered street lights in Cambodia, and joined house-building projects in the Philippines.

“It is important to grow our business, but at the same time we will actively participate in social contribution projects,” a spokesman for the company said. “Corporate social responsibility activities that can maximize the airline’s resources are welcome.”