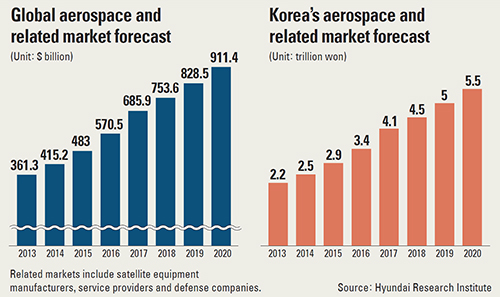 Those in the control tower at Naro Space Center in Goheung, South Jeolla, weren’t the only ones cheering the successful launch of Korea’s first space rocket yesterday.

The local aerospace industry and related companies ranging from satellite developers to service providers and even defense companies were rejoicing at the news.

“The aerospace and related industry people were really sitting on the edge of their seats as a failed launch would have meant the industry would not have received much support for an extended period,” said an industry insider who requested anonymity. “But with the successful launch, the aerospace industry and related businesses have secured a stable business for the next 10 to 20 years.”

According to a recent report by Hyundai Research Institute (HRI), the success of the rocket means Korea’s aerospace and related markets will nearly triple from 2 trillion won ($1.8 billion) now to 5.5 trillion won by 2020. The research institute expects the market will grow by 14 percent a year on average until then.

The broader domestic market, including satellite manufacturers, service providers and defense contractors, is expected to expand from 1.8 trillion won to 5 trillion won over that period.

In detail, the nation’s satellite industry is forecast to hit 2.9 trillion won by 2020 and the defense industry will be worth 2.2 trillion won.

Additionally, companies dealing with high-value technologies such as IT convergence and global positioning systems are expected to see significant advancement.

“The aerospace industry has a lot of high-added value that requires extremely high-grade technologies,” said Kim Kwang-suk, an HRI analyst. “It will not only contribute to the development of related fields such as broadcasting and telecommunications, but it should also grow to become one of the nation’s key industries.”

Kim noted that the world’s aerospace defense and convergence market including mobile communication services are likely to keep expanding.

The companies that are likely to benefit the most from yesterday’s launch include Korean Air, Hanwha and Hyundai Heavy Industries, which all took part in the rocket’s development. The launch, however, did not have much impact on the market as it occurred shortly after the bourse had closed for the day.

Although the rocket was jointly developed with Russia, its successful launch burnishes Korea’s technological credentials. Nonetheless, investment from both the private and public sector remains extremely low compared to other nations.

“While other countries are increasing their government budgets for the research and development of their respective space industries, the Korean government has been cutting back,” Kim said.

According to Euroconsult and government reports, Russia has increased its budget in this area by an average annual rate of 25.6 percent from 2006 to 2011. Japan added 10 percent a year over the same period, and the U.S. 1.9 percent. The U.S. spent $42 billion on R&D for space exploration in 2011, while Russia spent $6.5 billion and Japan $3.5 billion.