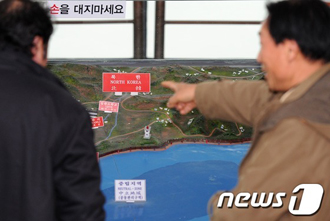 North Korean leader Kim Jong-un issued a secret order to “complete preparations for a nuclear weapons test between Tuesday and yesterday” and carry it out sometime soon, a source told the JoongAng Ilbo.

Kim also reportedly said, “The country will be under martial law starting from midnight Jan. 29 and all the frontline and central units should be ready for a war,” the source said.

The North’s state media reported Sunday that Kim convened an emergency meeting with top defense and security officials on Saturday. It said Kim made a stern command to take “effective, high-profile state measures” and “assigned specific tasks” to officials. The measures were sparked by new sanctions unanimously passed by the United Nations Security Council on North Korean entities and individuals, including travel bans and asset freezes, the media said. The reports boosted speculation that Kim is preparing a third nuclear weapons test.

The source told the JoongAng Ilbo Tuesday that Kim made six orders at the meeting including preparing a third nuclear test. South Korean government officials confirmed that based on sources in Beijing.

The source also said that a nuclear test would come earlier than predicted. Other analysts anticipate it would be held on Feb. 16, the birthday of former leader Kim Jong-il, the late father of the current leader, or Feb. 25, the inauguration day of South Korean President-elect Park Geun-hye. The idea of putting the country under martial law echoes the situation in March 1993, when North Korea withdrew from the Treaty on the Non-Proliferation of Nuclear Weapons. At the time, Pyongyang also ordered the military to be in a quasi-state of war.

The source said Kim Jong-un is worried about China’s reaction to a nuclear test. China is the regime’s closest ally and has warned the North not to go ahead with a third nuclear test.

“The recent criticism of China was too tough,” he said, according to the source. “We need to make this correct.”

This appears to refer to a statement made on Friday by the National Defense Commission, the North’s top military body, which said China “abandoned its principle” by approving the new UN resolution which includes tougher sanctions against Pyongyang.

“North Korean media directly quoted Kim mentioning ‘high-profile measures’ at the meeting,” said Kim Yong-hyun, a professor of North Korean studies at Dongguk University. “So he will definitely come through with some actions.”

As of Tuesday, the South Korean military didn’t detect any unusual movements in North Korea’s frontline units. Seoul is assuming a delay in the nuclear test because of a meeting of lower-level members of the ruling Workers’ Party that started on Monday. The meeting was the first since October 2007.

“Kim Ki-nam, a party secretary, ordered the party members to be ready for combat,” a South Korean government official said. “That jibed with the Kim Jong-un orders.”

The official speculated Kim Jong-un will issue an “Order from the Supreme Commander” through state media to ask the military and people to prepare for war.

Amidst escalating tension, a South Korean government official told reporters yesterday there have been increased activities and movement of equipment near a test site in Punggye-ri in the northeast part of North Korea.

“Activities of vehicles, equipment and work forces near the entrance of a mine have recently increased,” the official said. “We assume that the North is maintaining the conditions for a nuclear test at any time. But we still can’t say the test is imminent.”

North Korea has issued bellicose warnings every day since the UN Security Council members, including China, backed Resolution No. 2087 against the regime in response to its launch of a long-range ballistic rocket in December 2012.

On the day the Security Council unanimously approved the resolution, the North’s Foreign Ministry said in a statement there would be “no more dialogue on denuclearization” and vowed to “take physical action” in response, hinting at a nuclear test.

A day later, North Korea increased its rhetoric, issuing a statement in the name of the powerful decision-making body National Defense Commission, saying it will carry out “a higher-level nuclear weapons test” and an “all-out war” against Washington, which it blamed for leading the sanctions.