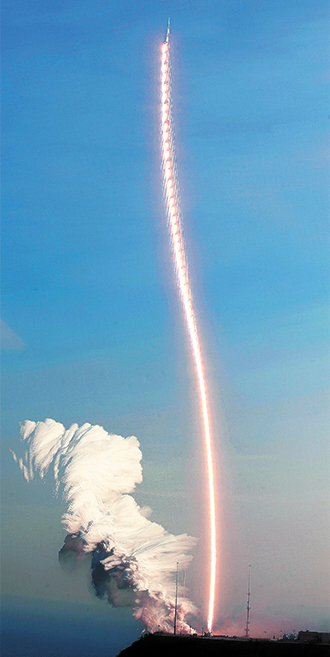 The Korea Space Launch Vehicle-1, or Naro, blasts off from a launch pad at the Naro Space Center in Goheung, South Jeolla, yesterday. The photo was taken with long exposure to show the trajectory of the rocket. [Joint Press Corps]

After a decade of development and two failed attempts, Korea finally succeeded in joining the world’s elite “space club” yesterday as the Naro rocket blasted off smoothly and made it into orbit.

The Korea Space Launch Vehicle-1 (KSLV-1) lifted off at 4 p.m. from the Naro Space Center in Goheung County, South Jeolla.

Nine minutes after liftoff, its payload, a 100-kilogram (220-pound) Science and Technology Satellite-2C developed by Kaist, separated from the two-stage rocket at 302 kilometers (188 miles).

Russian scientists developed the 170-ton first-stage thrust engine of the Naro, and Korean engineers developed the second-stage rocket led by the state-run Korea Aerospace Research Institute (KARI) in a project that cost some 800 billion won ($737 million).

As the 33.5-meter, 140-ton gleaming white rocket and its blazing tail disappeared into a pristine blue sky, cheers rivaling the roar of the engines echoed from thousands of spectators watching the launch and waving Korean flags.

Goheung residents, tourists and researchers gathered around the Naro Space Center and nearby observatory from morning in anticipation of the first Korean rocket’s penetration of space.

“The satellite separated from the Naro rocket 540 seconds after liftoff,” said Lee Ju-ho, minister of Education, Science, and Technology, at a press briefing one hour after the launch. “After analyzing related data, we have determined the Naro rocket was successful in deploying its satellite into the targeted orbit.”

The Science Ministry and KARI confirmed that transmissions were received from satellite by a ground station in Norway about 90 minutes after the launch, an indication the satellite was in orbit and functioning.

“As the saying goes, ‘Third time lucky,’?” said Jung Seong-hwan, a 53-year-old resident of Goheung. “We were able to open the door to space on the third try. Every time there was a failure, we, the residents, felt somehow responsible, but now, that burden is lifted.”

Pressure mounted on researchers at KARI to make the third and final attempt to launch the KSLV-1 a success, especially following two delays on Oct. 26 and Nov. 29 because of defective parts.

Korea began its space development program in 2002 with the aid of Russia’s Khrunichev State Research and Production Space Center. Their contract determined that this would be the last attempt.

By putting a 100-kilogram research satellite at least 302 kilometers into orbit above earth, Korea joins 10 other countries in the “space club.” The Asian countries in the club are North Korea, Japan, China and India.

North Korea successfully launched its own three-stage rocket, the Unha-3, on Dec. 12. Pyongyang insisted the rocket was meant for a space program, but most countries believe it was trying to test an intercontinental missile. The rocket put some kind of device into orbit, but experts dispute whether it is a functioning satellite. 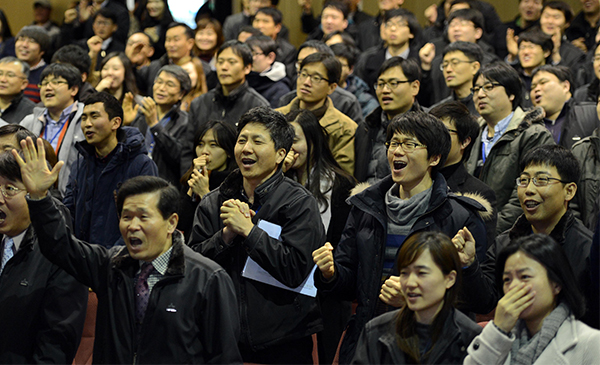 Researchers at the Korea Aerospace Research Institute, who developed the second-stage of the KSLV-1, react with excitement and joy at the institute in Daejeon yesterday following the successful launch of South Korea’s first space rocket. After a decade of development and two failed attempts, Korea finally succeeded in joining the world’s elite “space club” yesterday. [NEWSIS]


If North Korea is not included in the club, South Korea is the tenth member. The Science Ministry said yesterday that by definition North Korea’s launch could be considered its entry to the club, but it said South Koreans shouldn’t “dwell on numbers but focus on the achievement.”

The country now moves onto an ambition to launch a completely Korea-made three-stage, liquid-fueled rocket capable of carrying a 1.5-ton payload into orbit, originally slated for 2021.

Science Ministry officials yesterday said plans to build a completely Korean-made rocket can be sped up to as early as 2018 or 2019.

The ministry added that the following step would be to send a probe to the moon.

Park Sun-woo, 43, traveled from Busan to see the liftoff. “Hearing that this was the last attempt to launch the Naro rocket, I brought my kids who are on vacation,” he said. “The three-hour trip paid off. I hope that this success can help Korea become a space power.”

Officials added that final confirmation of the success of the launch will be made today, around 12 hours after the launch, when Kaist’s ground station in Daejeon makes contact with the satellite.

Kwon Se-jin, an aerospace professor at Kaist, said, “This is a remarkable achievement and marks Korea officially undertaking space development. This may satisfy the public, which has been very critical of the government during the development of the Naro rocket.”

“Though there is talk of Korea developing its own thrust engine several years earlier with the new administration,” he said, “I think it should be delayed because with the success of this launch, we need to plan step by step.”