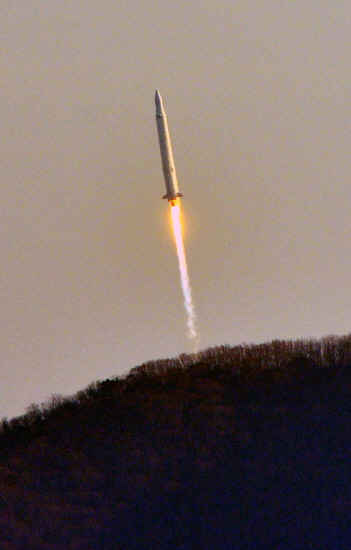 South Korea's space rocket apparently reached its target altitude following its liftoff from the country's Naro Space Center on Wednesday, officials said.
The Korea Space Launch Vehicle-1 (KSLV-1), also known as Naro, lifted off at 4 p.m. No apparent problems have been observed since its takeoff from the launch site, located 480 kilometers south of Seoul.

The Naro appears to have reached its target altitude and deployed its payload, the Science and Technology Satellite-2C, officials from the Korea Aerospace Research Institute said.

"The launch of the rocket itself succeeded," an official said. "Whether the entire mission of deploying the satellite into proper orbit was successful will be determined later in the day."

The 170-ton thrust space rocket is designed to reach its target orbit in 9 minutes following its takeoff. The initial outcome of the launch will be determined approximately 140 minutes after the launch when the rocket's payload, Science and Technology Satellite-2C, transmits its first beacon signal.

A final judgment will be available around 5 a.m. Thursday (local time) when the satellite makes its first contact with the country's ground station at the Korea Advanced Institute of Science and Technology in Daejeon, 160 kilometers south of Seoul.

Wednesday's launch marked Seoul's third attempt to join the global space club after its two earlier attempts in 2009 and 2010 ended in failures.
The third launch of Naro had also been scheduled to take place on Oct. 26 and again on Nov. 29, but was delayed both times due to defective parts.