“Run to the South” tells the story of a stubborn man who resists all obligations imposed by his country. Provided by Lotte Entertainment

If the large chunk of your annual salary that goes to taxes has you question the whole notion of “citizen duty,” you need to go see “Run to the South.”

Im Soon-rye’s upcoming film is about a man who gets fed up with the responsibilities of citizenship and living in a regulated society and flees with his family to a remote island far from the government’s reach. It is based on Japanese author Hideo Okuda’s “Southbound” in which Choi Hae-gab (Kim Yoon-seok) balks at everything he sees as unreasonable, not the least of which is an electric bill bloated by the addition of a TV license fee.

Choi doesn’t let his son drink Coke or canned coffee because he believes they are produced by foreign corporations. Nor does he allow his son to go to school; Choi distrusts the whole education system. When he pays his pension tax, he doubts that he will get back a single won.

Finally, Choi can’t take it anymore. He declares he is no longer a citizen and moves to an isolated island with his wife (Oh Yeon-soo) and children (Baek Seung-hwan and Park Sa-rang). 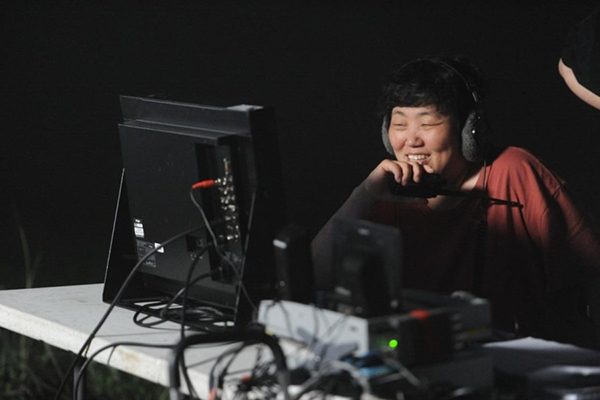 However, Choi soon discovers the island is no paradise when he and his family walk into the midst of a dispute over a plan to build a resort.

Choi and his wife are arrested when they protest the development, but they escape and are forced to live as fugitives, apart from their children.

“Our society is full of uncertainties and ferocious competition. ‘The South’ here means an ideal land. Every one dreams of an ideal place, but only a few manage to fulfill their dream,” said Im. “The family in ‘Run to the South’ is willing to step ahead and achieve what they want by breaking away from social norms and traditions.”

At first viewing, Im’s film seems burdened by weighty themes such as individual freedom, national duty and separation from country and family. Nonetheless, the director stresses that she tried to take a somewhat light approach.

“I think the subject is a bit serious and deals with heavy issues,” she said. “But I tried to deliver the story as joyfully as possible and that might offer some comfort to many people.”

Kim Yoon-seok, who plays the lead role, was drawn to the unconventional character.

“I read Hideo Okuda’s novel and found it interesting. The character is a bit like a fantasy hero who is unlikely to exist in the real world,” said the 45-year-old actor. “He is able to turn something everyone dreams of into reality by actually taking action. I even felt catharsis by doing something while acting that I can’t do in the real world.”

Two-thirds of the movie was shot on the remote islands of Daemodo and Cheongsando near South Jeolla.

“There was no air conditioning and not even accommodations for staff members. The islands are known for having lots of insects and there really were,” said Kim. “When I woke up I saw a dead snake.”

The veteran actor, whose major works include “The Chaser” (2008) and “The Thieves” (2012), also contributed to the screenplay. Kim said he only played a small part, but the director praised him for pitching ideas that improved the final product.

The upcoming film comes in the wake of a strong reception in Korea for books by Okuda. “Southbound” has sold 350,000 copies and his major work, “Flying Trapeze,” about 1 million.

“Run to the South,” scheduled to be released on Wednesday, is the latest in a line of films produced on the coattails of successful Japanese novels.

Last year, Keigo Higashino’s “The Devotion of Suspect X” was adapted into “Perfect Number,” directed by Bang Eun-jin. His “Into the White Night” was adapted for the silver screen as “White Night” in 2009 by director Park Shin Woo.