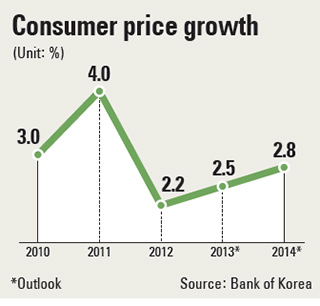 The Bank of Korea remains confident that inflation will move within its newly set target of 2.5 to 3.5 percent this year, but deflation fears are growing as the recession drags on and consumer prices have stayed below 2 percent in recent months.

These two factors, coupled with the nation’s huge level of household debt, could see Korea follow in Japan’s footsteps and become enveloped by the negative side effects of deflation, critics warn.

The Bank of Korea, in its inflation target report yesterday, forecast that consumer prices will grow 2.5 percent this year and keep creeping up in the following year. Until last year, it set the target at between 2 and 4 percent

The BOK said it has lowered the target as consumer prices have been stabilizing since the second half of last year, largely due to falling demand caused by the deceleration of the global and domestic market.

Falling commodity prices, including crude oil, also contributed to the drop. Consumer prices climbed 2.2 percent in 2012, or half the level of growth recorded one year earlier. This is also the lowest since 2006.

From month to month, inflation has been increasing at a rate of around 2 percent. It grew 1.6 percent in November and 1.4 percent in December.

The central bank is projecting that in the first half of this year it will hit 2.1 percent and rise to 2.9 percent in the second six months, evening out at 2.5 percent for the year as a whole. This marks a downwardly revised forecast from the 2.7 percent it issued last October.

The annual target is also based on the belief that the global economy is on a recovery track.

The central bank Gov. Kim Choong-soo and Finance Minister Bahk Jae-hwan said recently there are signs that the global market is already on a recovery track, for example the indications of a pick-up in the U.S. housing market.

But the comments were made before Wednesday’s announcement by the Fed that the U.S. economy shrank 0.1 percent in the latest quarter.

If major players like the U.S., Europe, China and Japan continue to recover at a slower-than-expected pace, it could further dampen Korea’s export-dependent economy and even trigger deflation, pundits caution.

“The problem is when deflation sets in and a vicious cycle starts. This becomes worse in the context of huge debt,” said a BOK official.

As of the third quarter last year, household debt amounted to a record 937 trillion won ($862 billion). It is expected to further increase as the central bank has kept a loose monetary policy until now. The central bank has kept the key borrowing rate at 2.75 percent for three months since lowering it by 0.25 percentage point in October.

Speculation is growing that it will shave more off next month as so much liquidity has flooded the global market, causing the Korean won to keep strengthening and exports to become less competitive.