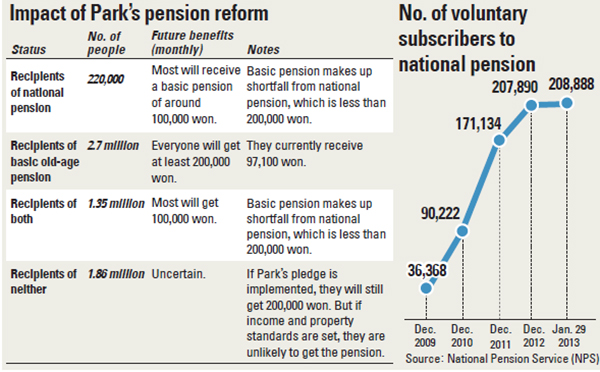 His wife, who is a homemaker, is not eligible for the national pension. Instead, she enrolled in a voluntary plan by paying monthly premiums of 89,000 won ($82) after deciding it would be helpful for her later years.

“As far as I know, the national pension plan will provide me with 160,000 won a month if I pay the insurance premiums for 10 years. However, when I saw newspaper reports recently saying that the new government will give a basic pension of 200,000 won to those aged 65 and older, I immediately wanted to stop paying the insurance premiums,” she said. 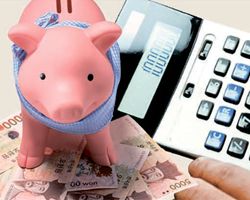 As President-elect Park Geun-hye said this month she will immediately enforce her pledge once she comes to power next month, many of those paying into the national pension voicing their complaints.

This is especially true for those who are exempt from having to enroll in a national pension plan but who choose to do so on a voluntary basis.

In December, no fewer than 70 canceled their plans by phoning the National Pension Service call center, and this number passed 120 in January.

“Many are hesitant about whether to maintain their plans, as the next government has announced it will provide a basic monthly pension 200,000 won even to those who haven’t signed up for any plans,” an NPS official said. “Inquiries have been flooding in since about two weeks ago.”

The number of such subscribers jumped from 36,368 in 2009 to 207,890 at the end of last year. Growth slowed last year, but at least 3,000 people are joining the national pension plan on a voluntary basis each month.

This dropped to around 1,000 last month.

Even those aged 60 and older who were planning to pay their insurance premiums over a 10-year span have been calling to cancel.

Lee, a 62-year-old living in Gyeonggi, said she only had five years more to pay before she started receiving the pension payments, but she still decided to walk away on Wednesday.

“I’ve paid 100,000 won a month for the last five years, and it wasn’t always easy to come up with the money,” she said. “But I don’t need to bother anymore as I’ll start getting double that amount from the government if I just hang on and wait for three years.”

NPS branch offices say they are being inundated with angry phone calls, e-mails and visitors.

“We explain to subscribers that no details about the government’s new plan have been confirmed yet, but still they complain,” said an NPS official.

According to Park’s pledge, those who are not set to receive a national pension will get 200,000 won a month. The others will probably get a much smaller amount, meaning the number of defectors could spike.

“It’s hardly a surprise to see arbitrary subscribers cancel their plans under such circumstances,” said Yun Seok-myung, researcher at Korea Institute for Health and Social Affairs.