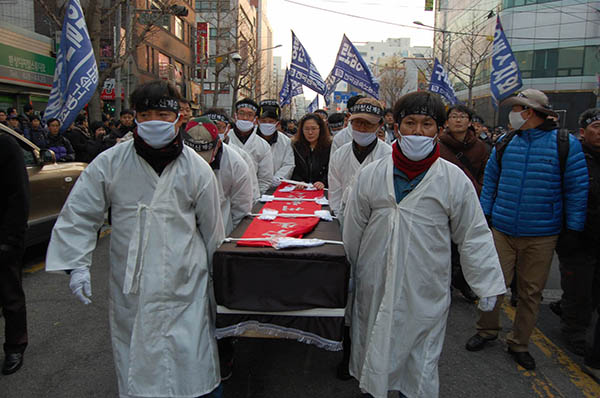 Unionized workers of the metal industry labor union under the Korean Confederation of Trade Unions carry the coffin of a worker who committed suicide in December into the firm’s shipyard building in Busan on Wednesday in protest of a lawsuit against the union. [NEWSIS]

In a macabre scene, members of the labor union of Hanjin Heavy Industries and the metal industry labor union carried the coffin of a worker who committed suicide in December of last year into the firm’s shipyard building in Busan and began a protest.

The union members were demanding the company withdraw its lawsuit against the union for damages amounting to 15.8 billion won ($14.4 million).

The action by the metal industry labor union under the Korean Confederation of Trade Unions began Wednesday when it took to the streets in the coastal city and headed to a funeral hall where the body of late unionized worker Choe Gang-seo was laid.

The 35-year-old worker took his life in December last year, following a notice from Hanjin that his job was suspended due to the firm’s financial trouble.

The unionized activists took the coffin from cold storage at a funeral home and carried it to the Yeongdo Shipyard.

According to reports, Choe’s widow was among the 150 members entering the Hanjin building with the body.

At the center of the dispute between Hanjin and the labor union is the 15.8 billion won lawsuit filed by the company against the union group for compensation from damages caused by the union’s strike in opposition to a plan for massive layoffs in 2010.

The labor union has been refusing to allow Choe to be buried until Hanjin drops its litigation.

The company has offered to solve the problem through discussions after Choe’s funeral.

The Busan-based shipbuilder was taken aback by the extent of the actions the labor group has taken to see their demands realized.

“We are speechless over this latest incident involving the deceased worker, especially when we are about to sign multiple overseas shipbuilding orders,” said Jeong Cheol-hwan, a director at Hanjin.

Since the labor group brought the coffin inside the building Wednesday, activists have demanded the police send in a freezer truck and other materials to keep the body from decomposing.

The shipmaker has refused to accept the request and claimed there are outside union members orchestrating the standoff, thus meddling in the firm’s internal affairs.

“About 140 members of the labor group in the building are from the Korean Confederation of Trade Unions, not from Hanjin,” said the company in its statement released yesterday.

Hanjin claimed the labor union used force to enter the building and warned its action could “jeopardize Hanjin’s efforts to stabilize the company by winning overseas shipbuilding orders,” in its statement released yesterday.

The company also urged the group stop its protest by using the dead body and solve the on-going dispute through negotiations.

The labor union claimed it was the police’s fault the protest escalated to them carrying the body to the shipyard.

They claim the authorities carried out violent measures to put down a rally that was legitimately scheduled and that they had a permit for.