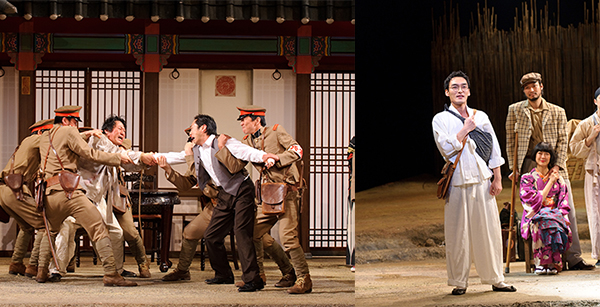 Tsuyoshi Kusanagi, above center, and Teruyuki Kagawa, second from right in the left photo, perform in “Bring Me My Chariot of Fire” by Korean-Japanese director and playwright Wishing Chong. The play will run until Sunday at the National Theater of Korea. Provided by the theater


The 2012 Japanese movie “The Way: Man of White Porcelain” was largely overlooked in Korea and Japan despite its ambition to find inspiration in the two countries’ shared history. It was based on the story of Takumi Asakawa (1891-1931), who developed a taste for Joseon Dynasty white porcelain during the Japanese occupation of Korea from 1910-45.

But a play on another connoisseur of Joseon ceramics, Muneyoshi Yanagi (1889-1961), followed a different path and emerged at the top of the box office in both countries.

The performance, “Bring Me My Chariot of Fire,” by Korean-Japanese director and playwright Wishing Chong, came to Korea this week after selling out performances during its entire six-week run in Japan from Nov. 3.

And its five-day run in Korea appeared to be emulating the same success early on as its premiere on Wednesday night received a standing ovation from a packed National Theater of Korea in central Seoul. The show is sold out through Sunday, according to the theater.

One of the selling points is the star-studded cast from the two countries, including Tsuyoshi Kusanagi, a member of the long-reigning Japanese idol group SMAP.

The 38-year-old actor known for his knowledge of the Korean language plays Naoki Yanagihara, a Japanese teacher in Korea during the colonial rule whose affection for Joseon white porcelain leads him to an unlikely friendship with Lee Sun-woo, the head of Namsadang, a Bohemian performance troupe. Cha Seung-won, a 42-year-old Korean model-turned-actor, plays Lee.

Oomura’s husband, played by veteran actor Kagawa, 47, is the owner of a nightclub who secretly moonlights as an aide for Korea’s independence movement.

The familiarity of the actors helps counterbalance the tragedy-ridden era in which the play is set.

But the mood is also playful because of the way the director conveys the story, using a similar style as he did with “Yakiniku Dragon.”

The 2008 play, directed in collaboration with Korean Yang Jung-ung, swept theater awards in Japan for its telltale portrait of a Korean-Japanese family in modern Kansai, southern Japan. Instead of tackling the issues head-on, the play instead makes clever use of small, humorous anecdotes.

In his latest work, Chong also does not directly relate historical facts, although they help to develop the plot in discussion of issues such as the Jeam-ri Massacre, which was retaliation by the Japanese Army for a 1919 independence rally in Suwon, Gyeonggi.

Rather, Chong focuses on individual relationships among those living in the era, including many Japanese who came to the colony in pursuit of happiness that they couldn’t have back home.

Korea appears as a background for a community of Japanese escapees, as Finland was in the 2006 Japanese movie “Kamome Diner.”

Lack of directness in addressing life for Koreans during colonial times has drawn criticism of past works, such as the film “The Way: Man of White Porcelain.” Yet Chong avoids such negative reactions by focusing on often humorous individual stories to which audience members can relate.

The interaction between Koreans and Japanese on stage is also kept to a minimum apparently to prevent the story from veering into national confrontation. Korean and Japanese characters interact only when absolutely necessary.

The era is said to have few winners in Korea, but troubled relations mostly end on a good note in the play. A confrontation between Yanagihara and Lee is resolved with Lee taking a risky tightrope walk to prove his friendship.

In return, Yanagihara gives a pep talk to encourage Lee and other Koreans, reciting William Blake’s poem “Jerusalem” with the title verse “Bring me my chariot of fire.”

At a recent performance at the National Theater, the plot and characters clearly overcame historical hurdles and impressed the audience, which remained enthusiastic throughout the 210-minute play.

It is true that the standing ovation, which started at the curtain call for the four main actors, may have been just a sign of respect for the actors - or perhaps a tradition carried over from Japan.

But the very sight of elderly Korean men and women enjoying a Japanese play about the colonial period and applauding the actors certainly leaves an impression.

Together, the actors and audience members politely share a heart-warming story in a show of friendship that seems a far cry from recent interactions of politicians from both countries.