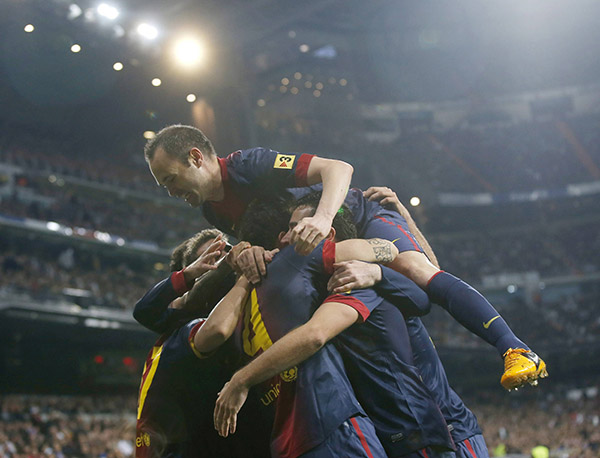 MADRID - Barcelona and Real Madrid played out a thrilling 1-1 draw in their Copa del Rey semifinal at Santiago Bernabeu Stadium on Wednesday.

With Barcelona enjoying the majority of possessions, the first-leg match grew in intensity with end-to-end play as both teams raced forward with fast-paced counterattacks.

As goalkeeper Iker Casillas was injured, Diego Lopez played in goal for Madrid and Cristiano Ronaldo was captain.

Lionel Messi intercepted a clearance and passed to Cesc Fabregas, who opened scoring in the 50th minute.

“This is obviously a good result; we are in the Bernabeu, a very tough field, and we will have our own fans behind us for the return leg of the draw,” Fabregas said.

The second leg will be at the Camp Nou on Feb. 27.

The match ended Messi’s prolific scoring streak in which he had found the back of the net in his previous 16 starts.

Madrid began the match attacking, and Gerard Pique fouled a charging Ronaldo in the first minute to concede a free kick, which the striker struck hard and head-high but goalkeeper Jose Manuel Pinto saved.

Barcelona had its first chance from a well-timed pass by Andres Iniesta that Jordi Alba ran onto, beating the offside trap, but he shot wide of the far post in the 13th.

Xavi Hernandez struck a free kick that hit the crossbar in the 21st.

“These matches are always difficult and I had said that in all probability the semifinals would likely be decided in Barcelona and that’s exactly what’s going to happen,” said Barcelona deputy coach Jordi Roura, who was in charge as Tito Vilanova was in the United States for medical tests.

The second half also began with Madrid attacking, but Karim Benzema shot high.Varane made his second vital interception to prevent Messi’s pass reaching Fabregas in the 56th.

Madrid countered when Michael Essien crossed and Ronaldo reached forward to try and head the ball in, but he failed to make contact in the 61st.

“I’m new here but I saw a very united and strong dressing room. We’re conscious this is a very tough rival, but we came out and showed our best side and displayed good ball control,” said Lopez, signed on Saturday to provide cover for Casillas. AP