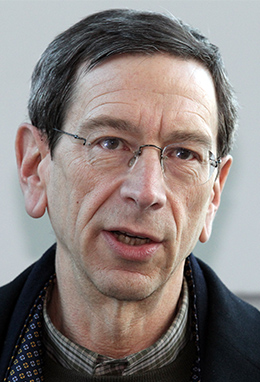 WASHINGTON - Robert Einhorn, the special advisor for nonproliferation and arms control at the U.S. State Department, will continue to deal with Washington’s thorny negotiations with Seoul on civilian nuclear cooperation, according to a U.S. government official, ending speculation he would step down from the job.

Many diplomatic observers expected Einhorn to quit his job at the department along with Secretary of State Hillary Clinton, who will be replaced by Senator John Kerry on Friday as President Obama’s second term gets underway.

“Special Advisor Einhorn will continue with most of his responsibilities, including negotiations on a successor U.S.-ROK (South Korea) civil nuclear cooperation agreement,” a department official told Yonhap News Agency Wednesday on the condition of anonymity.

Revising the so-called 123 agreement is one of the most urgent pending issues between the two nations.

The allies have been struggling to rewrite the pact signed in 1974 and set to expire in 2014.

The agreement on commercial nuclear cooperation bans Korea from reprocessing nuclear waste from about two dozen reactors that use U.S.-supplied nuclear materials.

Korea hopes to reprocess spent fuel and enrich uranium to meet the country’s status as an atomic plant exporter. Korean diplomats use the word “recycle” instead of “reprocess.”

In a meeting with an inter-agency U.S. delegation earlier this month, led by Assistant Secretary of State Kurt Campbell, President-elect Park Geun-hye stressed the importance of reaching a deal on the issue as early as possible.

The U.S., however, is apparently cautious due to concerns over a negative impact to its nonproliferation campaign.

Einhorn has been leading the U.S. negotiating team for the issue. His Korean counterpart is Park Ro-byug, the Ministry of Foreign Affairs and Trade’s ambassador of energy and resources.

Einhorn’s continued mandate may serve as a double-edged sword for Korea’s efforts to move the bilateral talks forward.

In a sense, uncertainties have eased involving the future of Washington’s top negotiator, which may help the two sides engage in full-scale talks, a diplomatic source said.

But Korean officials will continue to face Einhorn’s tough stance against Seoul’s demand, added the source.

The State Department has been reorganizing its teams on nonproliferation, arms control and sanctions issues. Yonhap