Embezzling boss of SK sent to jail for 4-year term

Embezzling boss of SK sent to jail for 4-year term 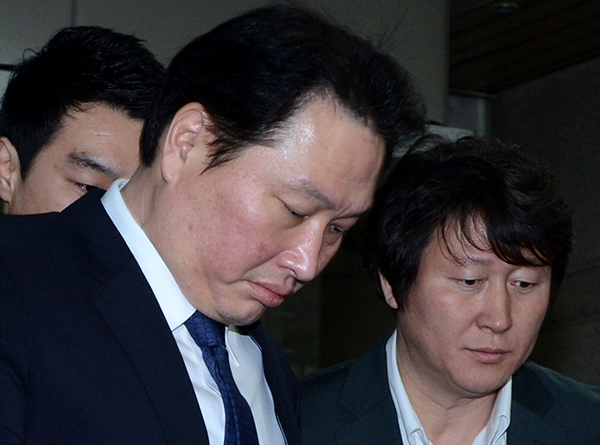 Chey Tae-won, chairman of the country’s third-largest conglomerate, SK Group, was sent to prison yesterday after a court found him guilty of embezzling company money and sentenced him to four years in jail.

The court sent the 52-year-old chairman directly to jail from the courtroom. The harsh treatment of one of the country’s richest men shocked the business community and suggested an end of get-out-of-jail-free cards for Korea’s tycoons.

The two brothers were indicted in January 2012 after prosecutors investigated allegations of massive misappropriations of SK money.

“Chairman Chey deserves strong criticism because he used his affiliates as vehicles for his crime,” Judge Lee Won-bum said. “He seriously disappointed the public by forfeiting the people’s trust in SK Group, which has led corporate social responsibility in the country since the 1970s.”

The judge said Chey didn’t show any sign of sincere repentance. “This court, therefore, faced the need to show stern punishment instead of leniency.”

In a short statement, SK Group said Chey would appeal.

“Although we made the best effort to prove Chey’s innocence, it was not accepted,” the group said. “As soon as we obtain the ruling, we will start legal reviews and take steps to prove his innocence, including filing an appeal.”

Chey was accused of embezzling 49.7 billion won from a 280 billion won investment fund set aside by 18 affiliates of the country’s third-largest business group. He and his brother were suspected of using the money to make futures investments.

Chey was also accused of creating a 13.9 billion won slush fund by paying inflated bonuses to group executives and reclaiming part of them from 2005 to 2010. The court, however, ruled the evidence wasn’t strong enough to convict him of that.

The court ruled yesterday that only Chey was guilty and that his 49-year-old younger brother followed his orders. It said the younger sibling was not directly involved in illegitimate investments.

Chey’s brother was charged with embezzling 179.2 billion won of the group’s money and incurring 20.1 billion won in losses to the company, an alleged breach of trust.

The prosecutors suspected the brothers used the embezzled money to cover huge futures investment losses incurred by the chairman.

The prosecution asked the court to sentence Chey to four years in jail.

Shortly after his sentencing, Chey proclaimed his innocence.

“I don’t know what I have failed to prove, but I really didn’t do this,” Chey told Judge Lee after he was given an opportunity to speak. “Above all, I only learned about the case in 2010. I don’t have a good understanding of what happened. All I can say is that.”

In Korea, suspended sentences were frequently handed down to convicted conglomerate owners to protect their stewardships of companies and their contributions to economic growth. That practice was broken last year when Hanwha Group Chairman Kim Seung-youn was jailed. The tycoon of the country’s 10th largest business group was ordered to serve four years in prison and pay a massive fine for breach of trust.

SK Chairman Chey dodged the bullet once before when he was convicted of insider trading and accounting fraud in 2008. At the time, he received a three-year suspended prison term with a five-year probation.

Due to his previous conviction, Chey was destined to face harsher punishment yesterday, but it was also clear that the sentencing was a reflection of a growing consensus in society that white collar crimes deserve real punishment. In the Dec. 19 presidential election, “economic democratization” was one of the common pledges by the two candidates. President-elect Park Geun-hye has made clear her intention to reform the conglomerates by promising no lenience to convicted tycoons.

The Federation of Korean Industries yesterday expressed regret over the court’s decision to send Chey directly to jail despite his contributions to the country’s economy.

“We are also worried that the ruling could fuel recently growing anti-corporate sentiment,” the largest business lobby said.