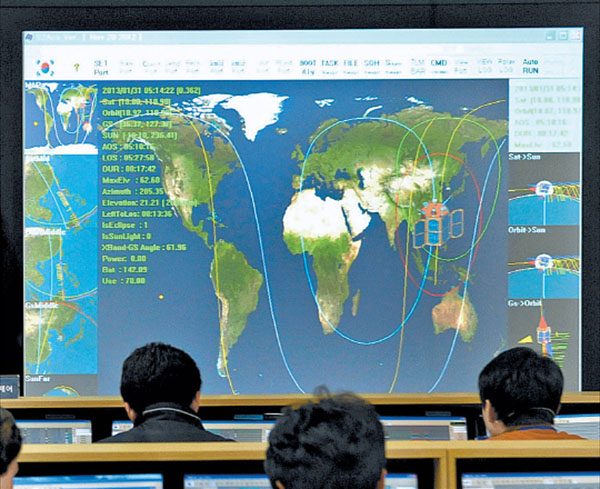 After the successful launch of the country’s first space rocket the previous day, researchers at Kaist’s Satellite Technology Research Center in Daejeon receive the first signal from Korea’s satellite yesterday at 3:28 a.m. By Kim Seong-tae

DAEJEON - Less than 12 hours after the launch of Korea’s first space rocket, a Daejeon ground station yesterday made contact with the locally built satellite put into orbit, confirming it was functioning normally and transmitting data.

The two-stage Korea Space Launch Vehicle-1 (KSLV-1), or Naro rocket, blasted off from the space center in Goheung, South Jeolla, Wednesday at 4 p.m. and the satellite separated from the rocket nine minutes later. A ground station in Norway made first contact with the satellite after 90 minutes.

But ultimate success could only be determined after Kaist’s Satellite Technology Research Center in Daejeon, the developers of the 100-kilogram (220-pound) science satellite, made contact with Naro’s payload, the Science and Technology Satellite-2C (STSAT-2C).

After a tense all-nighter, researchers at the station peered over their monitors as the first signal came from the satellite at 3:28 a.m.

“Solar panel position is OK!” called out a researcher. “Temperature and power OK!”

Applause echoed through the control room and researchers shook hands and embraced. Several researchers simply sat in their chairs, silent tears trickling down their cheeks.

Those researchers saw their work go up in flames twice before: in 2009, when the STSAT-2A satellite didn’t separate from the KSLV-1 rocket and both plummeted back to earth, and again in 2010, when the rocket exploded, destroying the STSAT-2B.

While the two-stage KSLV-1 was built with Russian assistance, the satellite, which is 1.5 meters (4.9 feet) high and one meter wide, was completely Korean-made.

All previous satellites sent into space by Korea have been foreign-made and launched from foreign soil aboard foreign rockets.

The ground station’s first communication with the satellite lasted for fifteen minutes.

Second and third communication with the satellite also went smoothly: at 5:11 a.m. for 15 minutes and at 7 a.m. for eight minutes.

“First contact with the Naro satellite was made successfully and all its functions are operating normally,” the Ministry of Education, Science and Technology confirmed yesterday.

The satellite is expected to orbit the earth every 103 minutes, or about 14 times a day. Its orbit is between 300 kilometers and 1,500 kilometers above the earth’s surface.

The satellite’s projected lifespan is about a year, which is short because its main function was to demonstrate that Korea can put a satellite into orbit.

It is equipped with femtosecond laser oscillator technology, which emits ultra-short pulses that are equivalent to a frequency of one-quadrillionth of a second, according to researchers.

“Basic commands to verify the state of the satellite have been made, and we received back data,” the Satellite Technology Research Center said.

Though North Korea successfully launched its own three-stage rocket, the Unha-3, on Dec. 12., experts still dispute whether it put a functioning satellite into orbit.

Kang Kyung-in, a senior researcher at Kaist’s Satellite Technology Research Center said, “For the next week, we will be inspecting the equipment loaded on the satellite, and from the second week, we will inspect and correct the satellite’s functions.”

The satellite is expected to start its normal functions within a month.