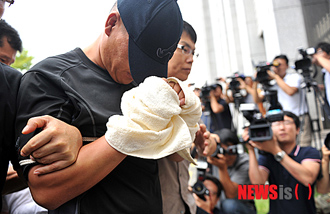 A district court yesterday sentenced a 24-year-old man to life in prison for kidnapping and raping an 8-year-old girl in the southern city of Naju.

The defendant, only identified by his surname Koh, was found guilty of abducting the sleeping elementary school first-grader from her home and brutally raping her before trying to kill her in August in Naju, 350 kilometers (217 miles) south of Seoul.

The Gwangju District Court also ordered that Koh be subject to chemical castration, hormonal treatment that suppresses sexual impulses for five years, that he wear an electronic monitoring anklet for 30 years and that his personal information be made available to the public for 10 years if he is released from prison on parole.

“[Koh] should be isolated from the society forever, considering various factors such as the brutality of his crime and the amount of damage [suffered by the victim],” Judge Lee Sang-hyun said in his ruling.

Prosecutors previously sought the death penalty against Koh, arguing that the victim had to undergo major surgeries due to the violent rape.

“The victim received treatment and awaits another one which is difficult even for grown-ups to endure,” Judge Lee said.

“The prosecution demands the death penalty and many people plead that [Koh] be severely punished.

However, [the court] deems it is not justifiable to hand down the death penalty [on Koh], which is the most extreme punishment to take one’s life,” Judge Lee added.

The high-profile case sent shock waves across the country, prompting President Lee Myung-bak to offer a public apology and raise alarm bells over women and children who are victims of violent sexual assaults.

As part of efforts to root out repeated sexual assaults against women and children, the government last year expanded the use of chemical castration for sex offenders who are at risk of repeating their crimes.