Take a train trip through a winter wonderland

Take a train trip through a winter wonderland 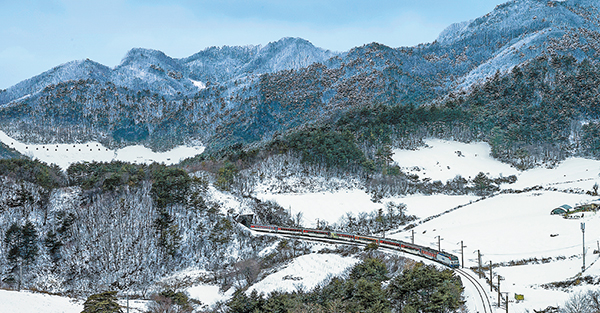 Snow is beautiful when it falls, but messy when it melts. If you’d rather just savor the beautiful part, winter train rides are a great option. Part of a boom in train tourism packages in Korea, these rail journeys take you through winter wonderlands full of snow-covered mountains and frosted hills while keeping you ensconced in a comfy, heated coach.

Today, we’ll give you a few tour options tailored to help you make the most of the beauty of winter.

The Fantastic Snow Flower Train tours temporarily operate from the end of December until February. Stops include Chujeon in Gangwon, the highest train station in Korea at 855 meters (2,805 feet) above sea level, and Seungbu in North Gyeongsang, a remote mountain village known for what are commonly called “snow flowers” in Korea, which refers to the lovely shapes formed when snow gathers on tree branches.

The train trip offers access to pristine mountainous areas that you can’t get to in a car. It runs along scenic mountains such as Taebaek, Sobaek and Deogyu, which are particularly picturesque in winter.

And when you get to Mt. Taebaek, you don’t have to climb it on foot. A 30-minute gondola ride will take you to the peak, where you’ll be treated with an epic winter panorama. 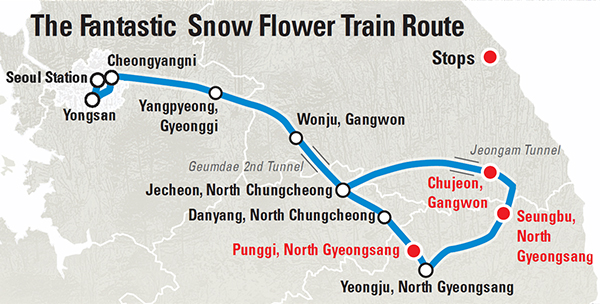 The train leaves Seoul Station at 7:03 a.m. and then heads to Cheongyangni in Seoul and Deokso and Yangpyeong in Gyeonggi to pick up passengers, all of whom have booked their tickets in advance. The 72 seats are usually all filled during the winter and the travelers mostly consist of families with children and young couples.

After an hour and a half, old dikes appear along the Seom River. At 9:15 a.m., the train passes Geumdae 2nd Tunnel, a loop-shaped single track. After traveling through Jeongam Tunnel, the second longest in Korea, it finally arrives at Chujeon Station, the first stop.

This lofty station is in Gangwon Province’s Taebaek, and here visitors get off for 20 minutes to take in the winter scenery.

The next destination is Seungbu Station, a tiny stop in a small village called Bonghwa in North Gyeongsang. The area is said to offer the most breathtaking winter scenery in the region.

Stepping off the train here, weary urbanites immediately find themselves surrounded by nature. The area is so tranquil that they say the only sound you can hear at this time of year is that of the snow squeaking beneath your feet.

The stop at Punggi Station gives travellers a chance to explore the traditional market in the vicinity that sells ginseng, the region’s specialty, along with a range of other items.

As the name of the tours suggest, there are ample opportunities to enjoy snow flowers en route. On Mt. Taebaek, snow-covered yew trees on the layered peaks create a sweeping snowy backdrop.

Through this weekend, a snow festival is happening in the area, with a variety of activities scheduled for visitors. One of the highlights is the international ice sculpture exhibition, participated in by artists from countries around the world including Finland, Canada and Japan.

Adventurous visitors can also get involved in the experiences on offer, such as dogsleds drawn by Alaskan malamutes and Siberian huskies across the vast white meadows. There are also igloo-looking rooms and ice cafes where you can get a bit of a feel for how the Inuit live. 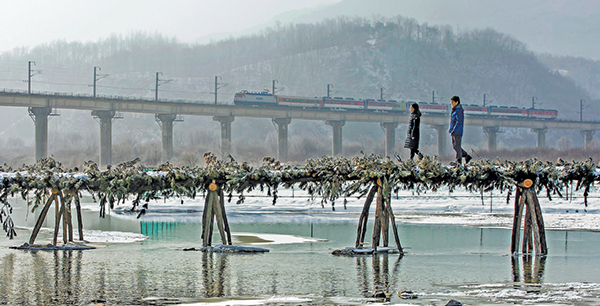 
By this point you may have had enough of the snow-based programs, and opt to pay a visit to the Taebaek Coal Museum, part of a one-day sightseeing tour. It’s the largest coal museum in Asia, where you can peer into a mine shaft.

The museum delves into the country’s heavy dependence on coal in the 1960s and ’70s for economic development. In the late 1980s, however, oil became the dominant energy source and the coal industry began to go into decline. This museum was designed to remind later generations that coal served as a foundation of Korea’s rapid rise and teach them about how people lived during the period.

The coal museum has 7,450 relics in its eight exhibition rooms and storage basement. The most popular activity on offer is the simulated underground gangway. As you pass along it, a motion-activated sound system pipes in the sounds that emanate from a real mine.

One- and two-day packages are available. The one-day tour package departs from Seoul Station at 7:03 a.m. and returns at 9 p.m. Tickets are 39,000 won ($35.54) for adults and meals are not provided. The two-day package, which makes a stop at Taebaek Station and continues with stops on the East Coast and other destinations, ranges in price from 49,000 won to 69,000 won.