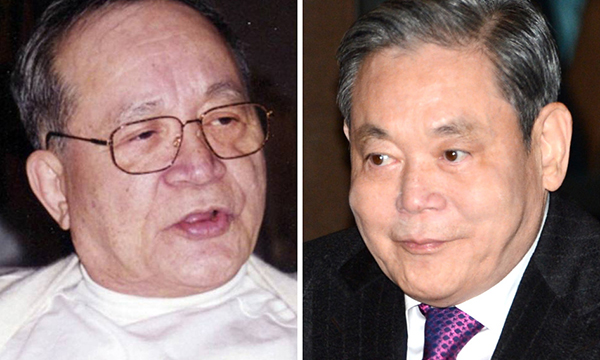 
As the top chaebol family is embroiled in a messy inheritance feud, Samsung Electronics Chairman Lee Kun-hee came away victorious over his siblings in a Seoul court ruling yesterday regarding stakes worth 4 trillion won ($3.64 billion) in the nation’s leading conglomerate.

The Seoul Central District Court yesterday ruled in favor of Kun-hee, 71, enabling him to maintain his hold on Samsung Life Insurance and Samsung Electronics.

First son of Samsung founder Lee Byung-chull, Lee Maeng-hee, 82, filed a lawsuit against younger brother Kun-hee last February asking him to return part of his inheritance. The original stake he requested was worth some 710 billion won. The older brother claimed Kun-hee had the shares secretly incorporated into his assets through borrowed-name accounts.

A separate lawsuit with similar demands was filed by his sister Lee Sook-hee later that month, requesting shares of some 190 billion won.

They claimed that Lee Byung-chull left shares in Samsung Life Insurance and Samsung Electronics for all of his children to inherit, not just Kun-hee.

“The key issue of the lawsuit was whether plaintiffs had the right to request the return of an inheritance,” the court stated in its ruling.

The court stated that the 10-year statute of limitations for inheritance claims had already expired for the stakes in Samsung Life Insurance, though some of the stocks were indeed left to the siblings.

Regarding claims to Samsung Electronics, the court ruled that it is difficult to consider the stakes as part of the siblings’ original inheritance. The court stated that “new stocks, even if partially bought from the cash generated from selling the inheritance, cannot be considered the same as the initial inheritance.”

Byung-chull, who died in 1987, designated his third son Kun-hee as his heir, bypassing his two older brothers. Maeng-hee said that after their father’s death his younger brother didn’t let the other heirs know about the secretly held stocks and pocketed them. Samsung Everland, an amusement park operator, is the holding company which effectively controls Samsung Group.

Maeng-hee’s side countered that they were not aware of the secret stocks until they were unveiled in June 2011 due to tax problems.

The public anticipated a shake-up of the power structure of Samsung Group which will weaken Kun-hee’s footing in the group should his siblings win their respective suits. Kun-hee is Korea’s richest man, and his son was promoted as vice chairman of Samsung Electronics in December.

Eight trials have taken place on the highly public family feud since last May. Maeng-hee and his relatives are likely to appeal the ruling, which will extend the family feud.

Samsung’s legal counsel, Yoon Jae-yoon, said after the ruling, “Whether you look at it factually or legally, it is an appropriate ruling.”

Food conglomerate CJ Group, chaired by Maeng-hee’s son, Lee Jay-hyun, said yesterday that it does not have a comment on the lawsuit. CJ Group, which separated from Samsung Group in 1994, has been attempting to distance itself from the Samsung family feud.