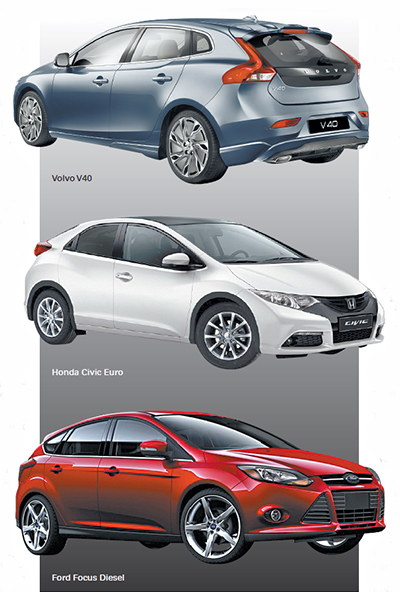 Sedans traditionally have been the dominant vehicles on Korea’s roads, but as tastes and lifestyles change, hatchbacks are gaining ground. And foreign carmakers will be going all out in 2012 with the introduction of at least 10 new hatchback models ranging from about 30 million won ($27,000) to 89 million won ($81,000).

Honda introduced four new models in the past two months, the latest being the Civic Euro on Jan. 15. The five-door compact hatchback, manufactured in Swindon in the United Kingdom, is the first European model to be offered by Honda Korea.

“Civic Euro will appeal to those who have sporty, active lifestyles,” says Honda Korea CEO Chung Woo-young. “We hope to sell 300 units this year targeting people in their 30s.”

Ford, meanwhile, has released the Focus Diesel, which is popular in the United Kingdom. The American company emphasizes that the hatchback, with a 2-liter Duratorq TDCi engine, is rated at 10.5 kilometers per liter (24.7 miles per gallon).

This week, Mercedes-Benz released the 89 million won CLS Shooting Brake, and Citroen rolled out its DS5, a midsized crossover that has been used as an official car for French President Francois Hollande.

This month, Fiat will reenter the Korean market for the first time since 1997 with its popular Cinquecento (500), a city car expected to challenge the Mini. Chrysler Korea, the official Fiat importer, will have a launch ceremony for the Cinquecento on Tuesday.

Volvo is poised to unveil the V40, which has attracted attention for having the world’s first pedestrian airbag below the hood. BMW Korea also plans to release the Mini Paceman.

Last year’s hatchback sales leader, Volkswagen plans to release the Polo in Korea the first half of the year. Details have not been released, but the Polo is already creating industry buzz because of its price and fuel economy.

In Germany, Polo is the third best-selling car behind Golf and Passat, while having a fuel efficiency rating of 27 kilometers per liter. Industry insiders expect the price of the car in Korea to be less than 30 million won in Korea.

In the second half of the year, Volkswagen will introduce the seventh-generation Golf with more room and upgraded features.

A dark horse in the hatchback race could be the Mercedes-Benz A-Class, which is expected to arrive late this year and will be the first subcompact Mercedes model to be sold in Korea.

“The success of Hyundai Motor’s i30 shows that hatchback segment is stabilized in local auto market,” saysKim Pil-soo, a professor of automotive studies at Daelim University College. “Nowadays, more automakers are trying to release sedan and hatchback versions of the same model.”

Furthermore, as leisure and outdoor activities become more popular, according to experts, so will hatchbacks, which often are more efficient and less costly that SUVs.

“Local consumers’ taste has become more diverse than before,” Kim says. “As carmakers also think Korean consumers are ready for hatchbacks, such model will be more frequently seen in the streets.”