Defectors get a feel for college life in the U.S.

Defectors get a feel for college life in the U.S. 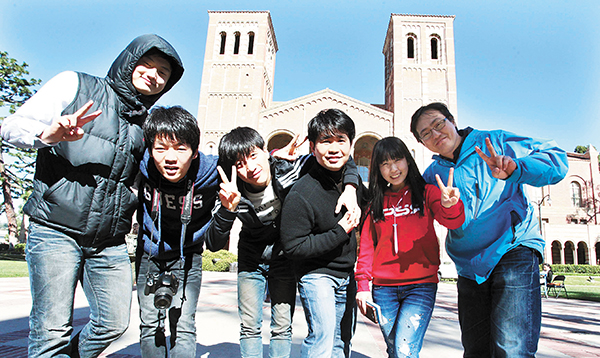 Three North Korean defector students, left, from Hangyeore High School in Gyeonggi visit a U.S. college campus for the first time and pose with University of California, Los Angeles (UCLA) students serving as their guides at the UCLA campus in Westwood on Monday. The remaining students of the eight that made a weeklong trip upon the invitation of international law firm O’Melveny & Myers requested their identities be concealed. By Kim Sang-jin

These students, from Hangyeore High School in Anseong, Gyeonggi, were invited on their first trip abroad by O’Melveny & Myers, a Los Angeles-based international law firm which recently opened its Seoul office.

The eight teens had in common the daunting experience of crossing over to the South at such a young age.

Some left the North as long as seven years back, others came as soon as a year ago.

The students were especially fascinated by the environment at California colleges, with coeds stretched out on the grass, tanning in the sun, and having classes outside with students sitting around their professor.

“They sit with the professor?” asked Seol-kyeong.

“In North Korea, because the teachers are scary, we have never even laughed with them before. If the teacher came to the classroom, we had to stand in a ‘salute’ posture and had to remain expressionless until we were told to sit.”

John Kim, engineering professor at UCLA, served as a mentor to the students and answered their stream of questions.

The Hangyeore students arrived in LA on a week-long visit on Jan. 24 and toured the Golden State. They took a trip up to San Francisco, and even did some shopping.

The students agreed that they enjoyed their visits to Universal Studios Hollywood and the Griffith Observatory the best.

One of the students said, “After settling down [in the South], having lots to eat and warm water to shower in was good, but it’s good to see that LA seems to be so leisurely.”

Compared to the rote-based, competitive education system in Korea, they were drawn to the laid-back California campus life.

Cha Yoon-tae, a 21-year-old student at UCLA, their tour guide, said, “In the beginning, I was just curious what it would be like to meet defectors, but I could not feel anything ‘different.’?”

He added, “I hope they do not lose their current innocence and steadfastly succeed in life in Korea.”

One defector student said, “Coming to the United States, I desire more to travel the world and live in many places.”