Korean-born designer comes back with a bang

Korean-born designer comes back with a bang 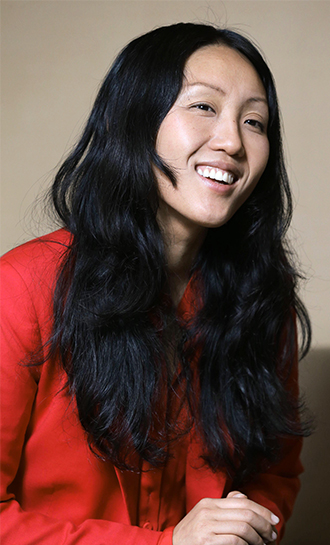 A Korean-born Australian designer, Yeojin Bae, returned to her birthplace for Australia Day and held a fashion show at the Grand Hyatt Hotel in Seoul on Jan. 24. Bae was excited to introduce her designs for the first time here, and Jessica Gomes, a well-known Australian model, added a gleam to the catwalk.

Accessories and shoes from Dongdaemun Market, a popular shopping district in eastern Seoul, have played an important role on the runway, and Bae found some shoes and belts in the district. Two days before the show, she visited the district by herself and bought the props that would match her collection.

“I dreamed of becoming a fashion designer since I was 2 or 3,” she said.

In Australia, where she arrived at the age of 5, Bae won the whole-hearted support of her parents to quit high school and attend the Melbourne Whitehouse Institute of Design.

At the time, she was the youngest student to enter and then graduate from the school.

“I was good at illustrations and dealt pretty well with difficult assignments as well,” Bae said. “I didn’t feel at a disadvantage because of my youth.”

After graduation, she worked for renowned companies like Marc Jacobs and Anna Sui. Then, looking for a new challenge, the designer began her own brand called Yeojin Bae at the ripe age of 30.

Since then, Bae, now 38, has sold her products at department stores including Barneys, Matches and Harvey Nichols in 10 countries.

Her newest brand, YB J’AIME, is aimed at younger customers and has been gaining popularity.

Bae said she simply hoped to enjoy her life as a designer - a profession she called more of a lifestyle than merely a job. And since coming to Korea, she has another idea up her sleeve.

“Taking this visit as an opportunity, I want to expand my career here,” Bae said.